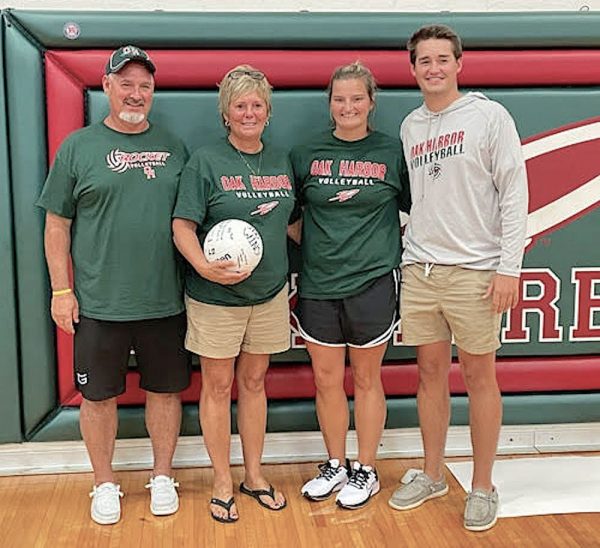 The list of accolades are lengthy. A district title, a league championship, an undefeated regular season, three sectional titles and some marquee victories over state power Huron.

Now Jackie Gezo can add 100 victories to her resume.

The Oak Harbor volleyball coach, in her seventh season leading the program, notched her 100th win after the Rockets defeated Woodmore, 3-1, last week. Gezo now has a career record of 104-47 (.689 ) and her team is off to a fast start at 7-0 and 1-0 in the Sandusky Bay Conference Bay Division.

Gezo, a 1983 Oak Harbor graduate, has coached within the program for 16 years — ranging from the JV coach to the freshman coach and coaching both grades in the junior high — before taking the varsity job. She credits her players from the Class of 2018, which consisted of Peyton Bloomer, one of the most storied players in team history who is competing on the volleyball team at Cleveland State University, Logan Harris, Kaytlynn Sandwisch, Alayna Hetrick and Jill Thorbahn, who she led as the eighth-grade coach in 2014, with talking her into taking over for Megan Maguire.

Harris now plays basketball at the University of Findlay.

“I coached for 16 years before taking the varsity job. I never wanted to be the head coach. I had coached the JV, seventh, eighth and ninth grade. I just coached where I was needed,” said Gezo. “I was content not being the head coach. It was those five that talked me into taking over the varsity team.

“All of them were freshmen, my first year as head coach, and they had a goal in mind. The attitude that they had to start the success of the program was crucial. I was the eighth-grade coach with them and then Megan Maguire stepped down and I took over.”

Gezo is always quick to credit others.

“There have been so many great players along the way, too many to mention,” she said. “I’ve gotten a lot of support from the parents that have also helped the program be successful. When they believe in what you’re doing and trust what you’re doing, you can accomplish some nice things.

“I’d like to also mention Brian Hall, who helped with the biddy program in the past and is now the seventh-grade coach.”

The community support is there, too.

“It’s very exciting to have the support of the fans. When building a culture, you need positive community support,” Gezo said. “It’s so much nicer having people there because last year it was limited (with the coronavirus). It makes it more exciting, the kids love it.”

Gezo also credits former players with helping to advance the program. There have been many great athletes, too many to mention.

This year’s senior class features the likes of Reagan Schultz, who owns a couple of school records and is set to play softball at Kent State University after she graduates, Grace Wolf, Riley Steinbrick, Ryann Steinbrick, Jaycee Snyder and Breanna Bowlick.

“This group of seniors wants to win the league title,” said Gezo, “and go far in the tournament.”

Gezo has gotten plenty of help from former players who have joined her as assistant coaches, most notably her daughter, Abbie, who played for Maguire.

“Abbie is my JV coach. She’s helped me every year since I started coaching the varsity. She helped me at the varsity level as an assistant coach and as the JV coach for two years,” said Gezo. “She’s a huge part of all of it, she runs a lot of the drills. If I didn’t have her here, we wouldn’t be as successful.

“There’s Kaytlynn Sandwisch, a former player, who is now an assistant coach for us, too. Melissa Belcher, she’s given us some advice over the years. She was the Central Catholic head coach and won a state championship with them (in 2007). She’s the sister of Denise Hetrick, Alayna Hetrick was her niece, and she’d come to the matches.

“This year, I have two more players, Ally Bloomer and Olivia Rahm, they’re volunteering their time. Peyton has stopped in to help us, too, at times. Peyton and Abby Dornbusch, a former player, have stopped in to help, too. Some of my past assistant and volunteer coaches who have helped include Donna Hetrick, Beth Schanke, Brooke Moore, Michelle Roberts and Jordyn Dunn.”

The program reached the pinnacle in 2017-18. In 2017, the Rockets won the Bay Division and their first 24 matches before falling to Central Catholic in the Division II district finals, 3-1. But Oak Harbor got over the hump the next year, dominating their district and advancing to the regional semifinals before losing to Parma Heights Holy Name, 3-0, who advanced to win the state championship.

“That was the first team since 1989 to reach regionals,” said Gezo.

The Rockets won their first sectional title in 21 years in 2016.

Gezo has received plenty of support from Abbie, a 2013 graduate of Oak Harbor; her husband, Mike, who graduated in 1985, and their son, Alex, who graduated in 2018. Abby played volleyball and basketball in high school and Alex played basketball, and was one of the best shooters in school history, golfed three years and played football his senior year and ran track.

“I think my husband gets just as excited as I do watching the game,” said Gezo. “My mom, Joanne Harder, has been a big supporter over the years; so has my sister, Jennifer Gordon, and her daughter, Tenlyee Gordon, my niece; she’s the manager of the team.

“Without so much family support, I wouldn’t be where I am. My father, Clint, was also a huge supporter and passed away during the 2016 season and I know he’s watching every game, too. Pam Bechtel was my coach in high school, she sends me texts now and then and still follows the program.