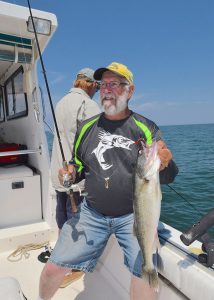 You know the old saying is “Go West!” That is not the case lately. East is where you want to be for all of the wonderful walleye fishing action. The walleye have moved from west to east, and for anglers in our Lake Erie Islands area, east of Kelly’s Island is where the fishing is as hot as the weather.

Anglers choosing to drift and cast to catch their walleye have chosen to head to the Cedar Point dumping grounds. This area has proven to be the best place to fish this past week.

As has been the norm for a while now, a single-hook weapon spinner rig is the best lure to be casting. Plenty of walleye have been caught using this technique. There has been an adjustment, though.

Don’t be afraid to use a little more weight when it comes to the sinkers weighing down the weapon rigs. We have been using a 1-ounce weight lately, but fishermen have discovered if you move up to a 1½-ounce weight, it makes a difference. You should often use the 1½-ounce weight even when the winds are calmer to ensure the lure stays in the “strike zone” longer for a good bite.

Northeast of Kelleys Island on a line between Kelleys Island Shoal and the Ohio-Canada border have been on fire for walleye while trolling. An extra tip for people that are choosing to troll is that you should not be afraid to increase your speeds while trolling. It can make the difference in getting walleye or “junk fish,” like sheephead or other fish that not many people put in their coolers.

Tru-trip diving planers are still the best way to put spoons, crawler harnesses and crankbaits in the strike zone. With the Tru-trips, the best success lately has been with Silver Streak and Stinger spoons.

Catfish continue to be the prominent catch from Sandusky Bay, whether fishing day or night or from shore or boat. Raw shrimp or nightcrawlers are the best baits for catfish. As long as you are on Sandusky Bay, the chances of getting into some catfish are pretty good.

I hope that in every weekly article I have written for The Beacon have not only helped you figure out where to go for the walleye, but how to fish for them. I keep trying to stress that drift-and-cast anglers have been in one spot and trollers have been in another.

Casters and trollers co-existing on Lake Erie is the key to it all. It really helps that anglers with different styles of walleye fishing have been at different ends of Lake Erie lately. So until next week, have fun but stay safe and as always, keep a tight line.