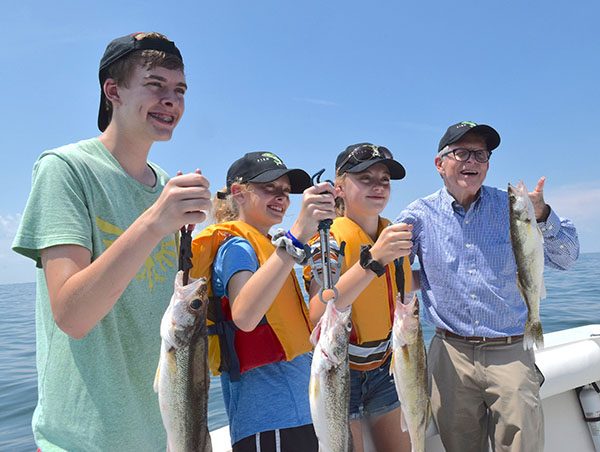 Gov. Mike DeWine and his grandchildren (left to right) Justine and Mary Darling and Josie DeWine, had a very productive morning of Lake Erie walleye fishing. 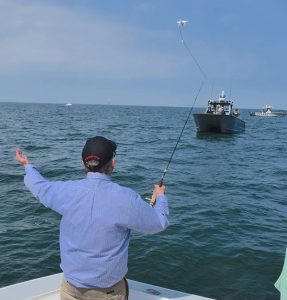 The most unique catch at the 40th annual Governor’s Fish Ohio Day was made by Governor Mike DeWine. While a camera boat filled with photographers clicked away, a drone was launched to get a panoramic view of the fishing action. DeWine made a cast and – to everyone’s surprise – hooked the drone! (See circle, with lure hanging from drone.) The governor’s lure and line were quickly removed by the drone operator. (Photo by D’Arcy Egan)

When Gov. James A. Rhodes decided it would be a good idea to celebrate the return of Lake Erie walleye fishing in 1979 with an outing organized by the Lake Erie Sport Fishermen group and Channel Grove Marina on East Harbor, anglers around Ohio took notice.

Lake Erie had earned a lot of nicknames back then. Some were not so nice. But after years of mediocre walleye fishing, decent catches were popping up again.

But that was 40 years ago. This time around, it was very obvious at last week’s Governor’s Fish Ohio Day in Port Clinton that the Lake Erie walleye fishing is now tremendous, driving a fishery that is giving up limit catches here, there, and off every port along the Ohio shoreline.

The largest crowd ever seen for Governor’s Fish Ohio Day was eager to test the waters at 6:30 a.m. by have a cup of coffee and connecting with one of a couple of dozen local fishing guides who volunteered to ferry journalists, legislators, celebrities and a large gaggle of state employees.

Despite the hot and humid weather, everyone was grateful wind and rain were not in the forecast.

I was selected to ride with DeWine and a trio of his grandkids — Justine and Mary Darling and Josie DeWine — aboard Capt. Jerry Coolidge’s charter boat 03 Fishing Charters docked at Lakefront Marina, a Safe Harbor Marina just a stone’s throw from downtown Port Clinton. For expert advice, Lake Erie Program Administrator Travis Hartman of the Ohio Division of Wildlife and President Paul Pacholski of the Lake Erie Charter Boat Association were aboard.

Gov. DeWine began by pressing many of the right buttons, praising Lake Erie’s amazing resurgence as the Walleye Capital of the World, and the vibrancy of the Ohio Department of Natural Resources and its Division of Wildlife, which are responsible for keeping an eye on fertile Lake Erie. 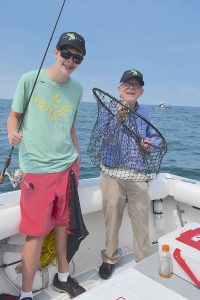 Governor Mike DeWine was an active angler during the 40th annual Governor’s Fish Ohio Day outing last week, catching a few Lake Erie walleye and even netting a fish for his grandson, Justine Darling, who was the top angler guided by Capt. Jerry Coolidge of 03 Charter Fishing, based at Lakefront Marina. (Photo by D’Arcy Egan)

Looking out at a plume of steam from the Davis-Besse Nuclear Power Plant on the Ohio shoreline just to the west, Gov. DeWine felt strongly that Ohio would soon pass House Bill 6 in the Senate, legislation that would allow the economically-important local power plant stay alive.

Back at the Lake Erie Shores & Islands Visitor’s Center later for lunch — Lake Erie yellow perch sandwiches were a hit — and speeches, DeWine pointed out that in his administration “we now have four directors, four amazing women, who are going to kick some real butt,” in protecting and managing Lake Erie and all of Ohio’s waterways. Director Mary Mertz of the Ohio Department of Natural Resources, was at the top of his list, joined by Ohio EPA head Laurie Stevenson, Director Dorothy Palenda of the Ohio Department of Agriculture, and Joy Mulinex of the Ohio Lake Erie Commission. Joining those women was Metz’s new chief of the Ohio Division of Wildlife, Kendra Wecker.

DeWine says Mertz has the best job in state government.

“Mary Mertz has a passion for the Ohio Department of Natural Resources, she loves to sail Lake Erie and fish Ohio’s waters, and to be outdoors,” said DeWine. “I like to kid her that she’s always outside, checking to make sure plans and programs are working.

“Mertz has also been to every state park in Ohio, keeping an eye on improvements, and makes frequent trips (to Ottawa County) to visit with tourism officials or for the dedication of the Lakeside Daisy Preserve (in Marblehead).”

Many have long forgotten that it was Gov. Rhodes who allowed the walleye stocks of Lake Erie to recover. About 50 years ago, armed with a Canadian biologist’s report of mercury content in Lake Erie walleye, Gov. Rhodes used that as an excuse to stop the commercial netting of walleye in Ohio waters.

It took a lot of years, but buoyed by a recent string of good to excellent spring hatches on the walleye spawning grounds of Western Lake Erie, the fishery has become an economic powerhouse driving one of the greatest tourism areas in Ohio.

“We can and should celebrate the great walleye fishing around Lake Erie, but we still have a lot of work to do,” said Gov. DeWine. “We have to come to grips with the phosphorous pollution that brings the algal blooms each year. We need far more wetlands to help to filter the water going into Lake Erie. And we’re helping to put together great plans for the recovery of Sandusky Bay.”