Carnage ensued at the Twisted Metal Demolition Derby on the race track. Big crashes were plentiful as cars were turned into scrap metal in front of the grandstand crowd.

Friday evening crowds filled the grandstand at the 57th annual Ottawa County Fair as the events got underway in the jam-packed grandstand.

Up first were future demolition derby participants and their power wheel vehicles.

Children from 4 to 8 years old ran their cars, jeeps, dune racers, quads, and even a tank into each other trying to break three balloons attached to the bumpers of their opponents vehicle. It was last man standing as the youngsters chased and collided with each other to the great joy of all those watching from the grandstand.

The eventual winner was Colt Moore of Oak Harbor.

Next up was the presentation of the King and Queen and their court, all recent graduates of Oak Harbor High School. Lauren St. Clair, 18, wore the queen’s crown, and plans on attending Terra State Community College this fall. Her king was 18 year old Spencer Goldstein. Caitlynn Noble and Jasmine Harkness, both 18, were first and second runners-up.

Then came the main event – the Twisted Metal Demolition Derby. Cars and trucks of all shapes, sizes, and years were sacrificed to the God of Carnage, as heat after heat entered a concrete enclosed area —16 vehicles at a time — and attempted to knock out each other by ramming into whoever was closest. 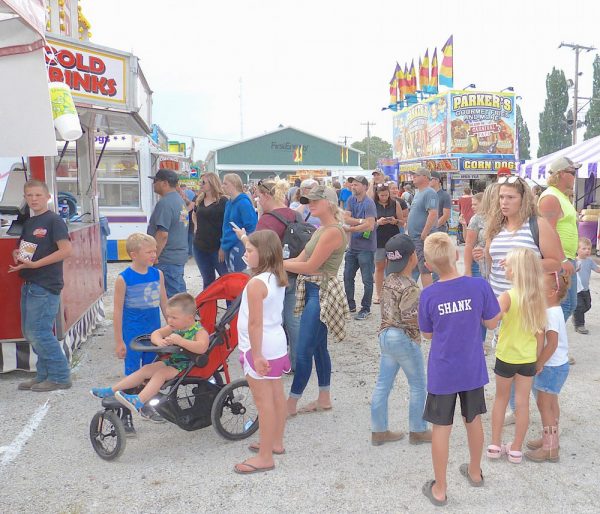 There can be only one winner. The crowd oh’ed and ah’ed as major hits sent vehicles flying into the walls and other vehicles. This was gladiatorial destruction at its finest.

The Fair ended Sunday with the “Open to the World Draft Horse Show,” featuring some of the biggest horses alive. Percheron’s, a breed of draft horse that originated in the Huisne River Valley in western France and originally bred for use as war horses, weighed in at over a ton.

There were Belgian Draft horses to rival a small car in size. Originally from the Brabant region of modern Belgium, they are one of the strongest of the heavy breeds.

Clydesdales, probably the most famous of the draft horses, rounded out the heavy breed competition. Clydesdale’s are named for the Clydesdale, or Valley of the River Clyde, in Lanarkshire, Scotland. Even the so-called pony class were very large horses.

Said Mike Stone, owner of Oak Haven, “We are very happy with a third place finish. The Percheron’s are world champions, and we competed nicely.”

Stone’s team is young, and he feels that in the next few years they will compete on an even basis with Jackson Fork Ranch. Oak Haven, competing in the other events, finished first in the single draft horse cart male division. There were 21 different exhibitors, a very good group for a smaller fair.

All in all, it was a great fair. The Future Farmers of America (FFA) and 4-H kids showed their prized animals, and great weather and major show events drew good crowds.