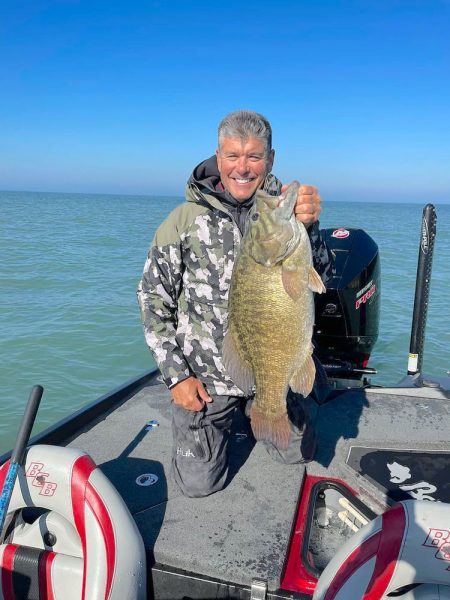 Gregg Gallagher of Fremont and the 10.15-pound smallmouth bass he caught Wednesday, Nov. 3 on Lake Erie while fishing with his son, Grant, in the Ontario waters of Western Lake Erie. (Photo by Grant Gallagher)

Gregg Gallagher has been a aficionado of Lake Erie walleye fishing for many years, and the business teacher at Fremont Ross High School has the help of an accomplished smallmouth bass fishing guide now in his son, Grant, who helped him land the largest smallmouth bass ever by a sport angler on the Great Lakes.

The Gallaghers have been fishing buddies since Grant was just a five-year-old with a passion for fishing.

“We’ve always been a package on the water, and we fish Lake Erie together every chance we get,” said the elder Gallagher. Grant has become an avid tournament bass fishermen, eschewing a baseball career at Adrian College in Adrian, Mich. to join the powerhouse Adrian College bass fishing team, where he has excelled.

Neither of the Gallaghers, however, could imagine the success they had on Wednesday, Nov. 3 while fishing the north side of Western Lake Erie in Ontario waters.

“I was working typical smallmouth bass lures on the bottom in the area we were fishing, and on this cast a fish hit it before it even touched the lake bottom,” said Gallagher, 54. “I thought it was a big sheepshead at first. Once Grant and I saw the bass, there was plenty of yelling and screaming.”

They pair quickly weighed the fish on their boat scale, and estimated it was bigger than 9 pounds. They knew it just might be a touch larger than the 9.8-pounder caught in June 1993 in the Ohio’s Lake Erie Islands area by Randy VanDam of Kalamazoo, Mich., whose brother Kevin VanDam is a tournament bass fishing star.

Grant Gallagher checked in by marine radio with Jason Clemons of Clemons Boats on Sandusky Bay, and that was the first step to confirmation of the record.

“Jason’s more accurate scale said the bass weighed more than 10 pounds. He provided a large cooler and sent us to Travis Hartman, the Ohio Division of Wildlife’s Fisheries Program Administrator at the agency’s fishery research station in Sandusky.

“To make sure the weight was certified, Hartman sent us to Port Clinton, where we put it on the certified scales at the Port Clinton Fisheries,” said Gallagher. “It not only topped VanDam’s monster bass, but also Ontario’s 68-year-old record, a 9.84-pound smallmouth bass, the biggest ever caught on the Great Lakes.

While Gregg Gallagher could not imagine hooking and landing such a trophy, he had plenty of praise for Lake Erie’s smallmouth fishery.

“The bass fishing on Lake Erie just keeps getting better and better, and while Grant and I loved fishing for walleye together, his bass expertise and bass tournament accomplishments were what made catching this monster bass possible.

“Grant is the captain of the boat these days, a Bass Cat he bought from Clemons Boats, and his ability to determine fishing patterns and techniques is amazing,” said his father. “From angling electronics to tackle selection and fishing techniques, Grant has become the most accomplished fisherman in the family.”

The Gallaghers longtime friend, Ross Robertson, was tapped for his input, and is already airing a video of the Gallaghers’ record-setting catch on his web site, bigwaterfishing.com.

Grant, 24, is following in his father’s footsteps, becoming a school teacher in Hudson, Mich., and continuing to fish tournaments and fun fish with his father. It’s unlikely he’ll hook the international smallmouth bass record of 11 pounds, 15 ounces — it was set in 1955 at Dale Hollow Reservoir in Kentucky by David Hayes — but few thought VanDam’s 9-pound, 8-ounce bass would ever be matched.