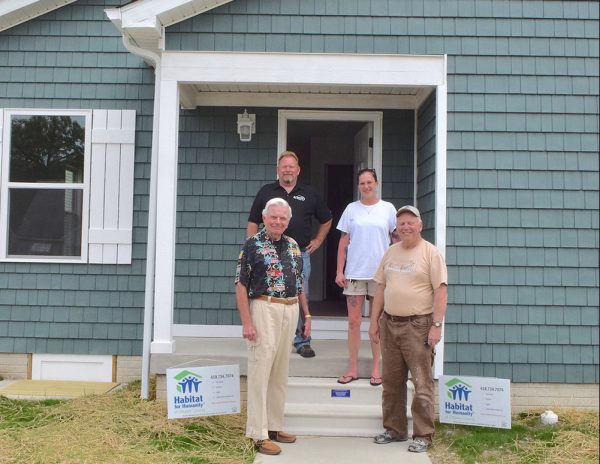 Many of the partners were on hand last week for the initial tour of the newly completed Habitat for Humanity home on Walnut Street in Port Clinton. From left to right are: Bill Coder of the Ottawa County Community Foundation; Andrew Schuster of West Side Roofing in Brook Park, Ohio; homeowner Melissa Stockmaster; and Construction Manager Paul Henry of Habitat Humanity of Ottawa County.

Paul Henry has spent the winter and spring building a Habitat for Humanity home on Walnut Street in Port Clinton. He’s had plenty of help from new owner, Melissa Stockmaster, and her family, and the beautiful 1212-square-foot house is almost ready to become her home.

“We’ll wrap up the little things, and have her ready to move in,” said Henry. “This has been a wonderful experience, and I’m so happy to have been able to be a part of it.”

The Habitat for Humanity home had its open house last week. Henry was the first official on site to greet supporters and media eager to tour the three bedroom, one-and-a-half bath house.

“I’ve been so proud of the family,” said Henry. “They’ve been here every day with us all winter, even in bad weather, and we all kept plugging along to get it done for them.”

Henry, 72, and who had retired many years ago, is back in the area living in his old home town of Genoa. He said the Habitat for Humanity home is a win-win for the neighborhood.

“It’s a great Port Clinton community, a close-knit neighborhood right on the Lake Erie shoreline, with beautiful Lakeview Park just a block away,” he said. The park takes up an entire block with such amenities as a playground, the Lake Erie beach across the street, a picnic area with charcoal grills and a concession stand.

“For my son, Jvion, the basketball court is his favorite,” said Stockmaster, a single parent who manages a nearby apartment building and has never owned her own home.

Stockmaster certainly did not get her new home for free. After qualifying, financial disclosure and having a full-time job, she and her family put in the “sweat equity” so important to the project.

“The family was very appreciative,” said Henry. “A lot of volunteers say they’re ready to help, but when the time comes they are nowhere to be found. No less than four to five members of this family was here every day, working hard on their new home.”

It was Henry’s first Habitat for Humanity construction job, but not his first home construction. Before retiring, he had built homes for BP Oil. After retiring, he moved to Florida where he had a large workshop.

“I love building houses,” he said. “What a better way to give back to the community, using my skills to make things better for someone else. God gives us all a talent, and he gave me the talent to bend nails in order to better this world.”

Henry returned to Ottawa County because his son, Wyatt, now lives in Marblehead and convinced his father that Ottawa County was a better fit than Florida.

“I also found that I can’t ever retire,” said Henry. “I love this job, working in my home workshop and playing golf.”

It takes a lot of partners to plan and finished a home, said Director Debi Heiks of the local Habitat for Humanity organization, which has partnered with 25 families to build homes in Ottawa County.