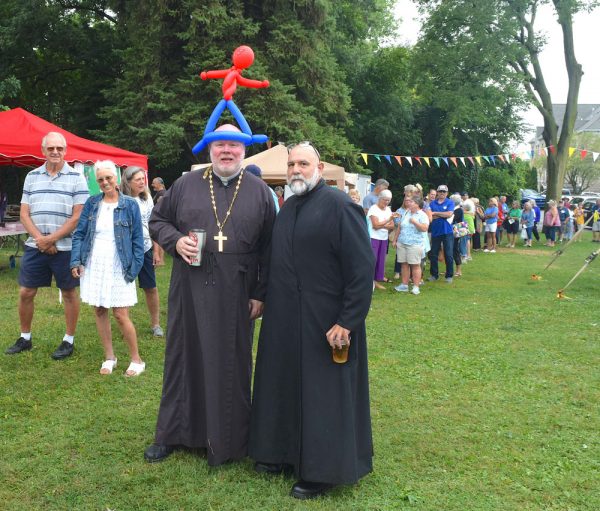 The Very Reverend Archpriest Andrew Bartek, the rector priest, was in good spirits on Sunday for the 65th annual Halupki Festival at Holy Assumption Orthodox Church. Wearing a Spiderman hat made of balloons to welcome revelers, he was joined by DCN Daviel Machar, the rector of St. Thomas Eastern Orthodox Church in Fairlawn, Ohio. (Photo by D’Arcy Patrick Egan)

The 65th annual Halupki Festival at Holy Assumption Orthodox Church is a treat for the Village of Marblehead each year, and hundreds of people from around the area flocked to its annual party on Sunday. Next year will be an even more memorable celebration, said the Very Reverend Archpriest Andrew Bartek, the rector priest.

“In 2023, Holy Assumption Orthodox Church in Marblehead will celebrate its 125th anniversary, and is the oldest orthodox church in Ohio,” said Father Bartek. “We’ve been notified that top international orthodox church officials will attend the celebration next year.”

The long lines to purchase dinners and desserts wound past the festival tent at mid-day on Sunday, devouring Eastern European fare that included halupki (stuffed cabbage), pierogies, kielbasa and baklava, a sweet treat that originated in the 9th century in Persia.

With only 30 parishioners, Holy Assumption Orthodox Church recruited a small army of volunteers from the tightly-knit community to accommodate a crowd that seems to grow each year. The Frank Moravcik Band from Cleveland, Ohio returned to provoke dancers with plenty of polkas, featuring Linda Hochevar on the button accordion joined by Frank Okicki on banjo and Al Bambic on drums.

There were games for the kids, balloon hats, exhibits and many picnic tables under the festival tent for al fresco dining. Businesses all along Main Street in Marblehead enjoyed the crowds, and the iconic Marblehead Lighthouse welcomed visitors as it marked its 200th anniversary this year.