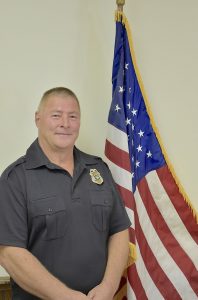 With more than three decades of experience in law enforcement, retired Ottawa County Deputy Dean Hammer will return to where his career began in 1985. Starting in October, Officer Hammer will serve under the Oak Harbor Police Department as the new Student Resource Officer (SRO) for Oak Harbor Middle School and R.C. Waters Elementary of Benton-Carroll-Salem School District.

“Benton-Carroll-Salem Schools welcomes Officer Hammer as our new SRO,” said Superintendent Dr. Guy Parmigian. “We are privileged to partner with Chief Eric Parker and the Oak Harbor Police Department on our most important priority of keeping students and staff safe on campus.”

A 1983 B-C-S graduate, Hammer grew up in the Woodville/Gibsonburg area and moved with his parents to Oak Harbor at 15. He said he was the “new kid in town” and immediately “connected with students who didn’t normally easily connect with anyone else.”

Small for his age and sometimes a teen victim of bullying, Hammer knows and understands what youth are going through and expects to provide a listening ear, as the SRO.

“I see kids who are singled out,” said Hammer. “I like to talk to them and let them know I’m there if they have trouble at home or at school … I’ll try to help anybody out, that I can. That’s how my parents raised me.”

On many levels, Hammer’s own personal experiences impacted his entire career, and, over the years, his service as an officer has directly helped many area youth and those individuals just needing a kind word and a little understanding.

Hammer began as an auxiliary police officer with Oak Harbor’s Department, before moving on to the juvenile courts as an in-home detention officer. After a short stint on Put-in-Bay, he eventually landed at the Ottawa County Sheriff’s Department, where he spent 27 years. Much of his time he aided the Inmate Work Program, a sentence-reducing incentive program which utilizes jail inmates convicted of minor, non-violent crimes, to perform community work such as trash pick-up and pulling weeds. Many of those same inmates eventually asked Hammer for a job reference upon their release and, according to Hammer, the experience changed his life.

As an SRO, Hammer wants B-C-S parents to know the students are safe at school and “someone is there to watch over their children.” With three children of his own, all graduates of B-C-S, as well as five grandchildren, Hammer calls many other community youth “family,” including the children of his significant other, Jean Marquette. Over the years, he has coached a lot of baseball and supported youth programs such as Safety Town, Hands on a Truck, and the United Way holiday shop.

Hammer also started the Ottawa County Sheriff’s Explorers, a teen program for youth interested in law enforcement careers. A multiple Life Saving Award recipient, Hammer was awarded “Deputy of the Year,” during his tenure, and Ottawa County Commissioners recently proclaimed Sept. 11 as “Dean Hammer Day,” a fitting honor bestowed on an individual who has given back so much to his community. He intends to continue to do so as SRO at B-C-S.

“Having direct daily contact with the youth of our community has opened opportunities to build trust that brings fantastic results,” said Oak Harbor’s Chief Parker. “Officer Hammer and his experience will be a great addition to our SRO program.”

“Anyone that knows me knows I am dedicated, and I give 100% to anything I do,” said Hammer. “Oak Harbor is special. In this community, everybody seems to work together. If someone needs something, everybody pitches in. It’s a beautiful place … It’s my home.”

Located at 146 N. Church Street, the Oak Harbor Police Department may be reached at 419-898-2055 (non-emergency contact number). The building is closed to the public, due to Covid-19, but staff will come outside and address anyone in need.

Of note on the Nov. 3 ballot is an Oak Harbor police renewal levy, a much-needed income resource to provide the department with day-to-day operations. The levy, which raises approximately $120,000 a year, has been used in the past to replace uniforms, repair vehicles and further police training. It will require no increased annual cost to residents to maintain. For more information about Village of Oak Harbor’s police renewal levy, Issue 1, visit the Village website, oakharbor.oh.us, or contact QBabcock@OakHarbor.oh.us, 419-635-7560.