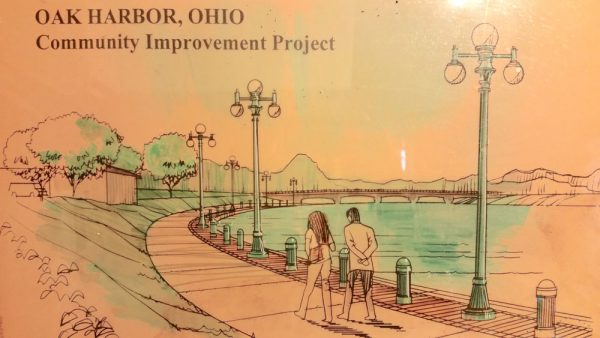 The Portage River Walk in Oak Harbor has been a community dream for more than two decades, and will finally become reality with a $500,000 grant announced in December. This drawing was created more than 20 years ago to promote the construction of a downtown river walk in the village. 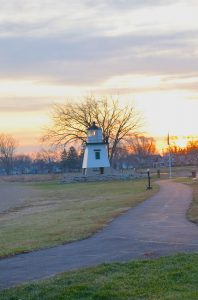 Waterworks Park in Port Clinton has been a work in progress in recent years, providing attractive walkways and shoreline views of Lake Erie, including the new Port Clinton Lighthouse. (Photo by D’Arcy Patrick Egan)

Life along the Lake Erie shoreline and Portage River has always been enhanced by the beauty of those waters. In the years to come, it is just going to get better and better for residents and visitors.

The City of Port Clinton has been working to make Waterworks Park and the Lake Erie beaches a beautiful place for a stroll. Already featured is the new Port Clinton Lighthouse, “The Lightkeeper” bronze sculpture, Derby Pond, a revitalized wetlands and wide open spaces that allow such wonderful events as the Walleye Festival and captivating concerts, such as the Rock the Light Music Festival.

City officials are now working to extend the city’s scenic presence to the west, seeking a $1 million grant to remediate the Lakeshore Drive shoreline. They want to remove the telephone poles from the Portage River Bridge area to the old Moose Lodge property, shore up the shoreline and create a walkway and bike path.

“It is a shoreline Revetment Project, and we’re working to get $1.4 million in funding through the Ohio Department of Transportation’s Transportation Alternative Program (TAP),” said Mayor Mike Snider. He admits that the project will be a difficult one because the shoreline experiences weather events that range from a northerly breeze to gale force winds.

Many remember the winter storm that created 30-foot tall ice mountains there in January 2018, with shove ice pushing stones and rocks onto Lakeshore Drive.

Creating a bike path will allow the city to apply for some matching funds from the new Ottawa County Park Levy. It was passed on Nov. 3, and will generate

$1.1 million annually starting in 2021. A feature of the park levy is its ability to generate matching funds that could allow cities, villages and townships to apply for state and federal grants.

A critical reason for the Lakeshore Drive project is to replace 3,500 feet of a 14-inch wastewater sewer line. Vulnerable to volatile shoreline weather, a breach in the sewer line would be a huge problem for city service crews. 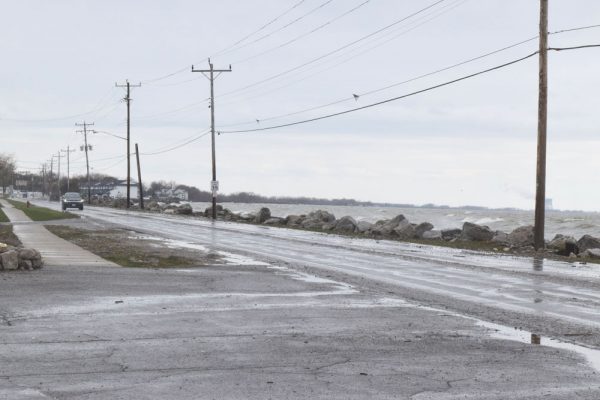 A walking trail along Lakeshore Drive on the west side of Port Clinton would include much-needed erosion protection — and Lake Erie views for residents and visitors who stroll along the shoreline. (Photo by D’Arcy Patrick Egan)

Mayor Snider said a long-term solution would be to build a new walkway, burying the power lines and install decorative lights, which would beautify the entire area and encourage people to stroll that section of the shoreline along Lake Erie.

Oak Harbor is realizing its dream of riverfront walk on the Portage River, with the Ohio Capital Budget allocating $500,000 in December for a project that is two decades in the making.

“Our citizens have had these dreams and visions for many years,” said Mike Shadoan of the Oak Harbor Development Group. “It’s awesome to see our goals coming to fruition. We can now see the light at the end of the tunnel.”

In addition, the Portage River between Oak Harbor and Port Clinton is set to be dedicated as the Portage River Water Trail in the coming months by the Ohio Department of Natural Resources, providing signage and access areas to encourage canoe and kayak padders from around the area and all over Ohio to visit the waterway in the coming years.