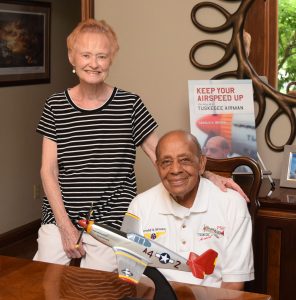 Legendary Port Clinton pilot Lt. Col. Harold Brown is one of only eight of the celebrated Tuskegee Airmen of World War II who are still alive, and he will always be a Red Tail. The Tuskegee Airmen earned that moniker in World War II because their P-51 Mustang fighter planes were emblazoned with a bright red tail.

There have been movies made about the all-black pilots of the 332nd Fighter Group, who experienced racism in a then-segregated U.S. Air Force.That is, until the talented fliers became a valuable cog in protecting bombers winning the war in Europe.

Brown and his wife, Dr. Marsha Bordner, even wrote a popular book about his war experiences: “Keep Your Airspeed Up: The Story of a Tuskegee Airman.”

The Washington Redskins, who are finally willing to scrap their nickname so offensive to native tribes, have been wondering if “Red Tails” would be the perfect replacement for “Redskins.” It would honor a group of pilots who won the Congressional Gold Medal in 2007, and by a National Football League where 70% of the players are men of color. And, said Brown, “it has a nice ring to it.”

Brown has long been a pro football fan, and still roots for the Cleveland Browns.

“When we were stationed in Columbus after the war, all of the guys and I would get together and take a bus to Cleveland for the Browns games,” said Brown. “They were really good back then, and they were led by Hall of Famer Marion Motley, one of the first black players in the NFL.”

The Washington franchise, however, was one of the last to employ a black player, Bobby Mitchell in 1962.

“If renaming the team the Red Tails would honor the Tuskegee Airmen, I’m all for it,” said Brown. “There’s only eight of us left, and I’ll be 96 on Aug. 19. It won’t be too long before none of us are around, and I want our name and our story to be kept alive. The Tuskegee Airmen fought for our country, and for our race.”

Actually, there weren’t many Tuskegee Airmen to begin with. There were about 14,000 at four air bases around the country, but only 992 were pilots, and only 355 flew in the war. Brown flew 30 missions. The bomber pilots they escorted soon began to realize their best chance of success was having a Tuskegee Airman protecting them from enemy aircraft.

A Minneapolis native, Brown, was shot down late in the war, bailing out of a badly-damaged P-51 fighter. He became a prisoner of war, and was rescued by the advancing U.S. Army a couple of months later.

Brown was in the Air Force for 23 years, and played an important role with the Strategic Air Command during the Cuban Missile Crisis. He retired in 1965 as a Lieutenant Colonel, and had experience flying 20 different aircraft. He went on to earn a PhD, and became vice-president of academic affairs at Columbus State Community College.

He married Dr. Marsha Borden, president emeritus of Terra State Community College in Fremont, who teamed up with him to write the book about the Tuskegee Airmen. They’ve settled in Port Clinton, and are still very active. Brown enjoys playing golf, speaking to student groups, doing book tours and traveling the country.

“If the Washington team should decide to rename them the ‘Red Tales,’ I’m certainly going to expect them to fly us to Washington for the first game,” said Brown, with a laugh. He’s been there many times before, but said that trip would certainly be special.

According to a Time Magazine column this week written by Sean Gregory, Red Tails seems to be getting a few nods from Washington fans. A Yahoo poll found the Red Tails moniker was the early favorite by a 3 to 1 margin over Warriors, Hogs and Generals.

“It would be the most appropriate time to do it, in view of what’s going on in the country,” Brown told Gregory. “You know where my vote goes.”