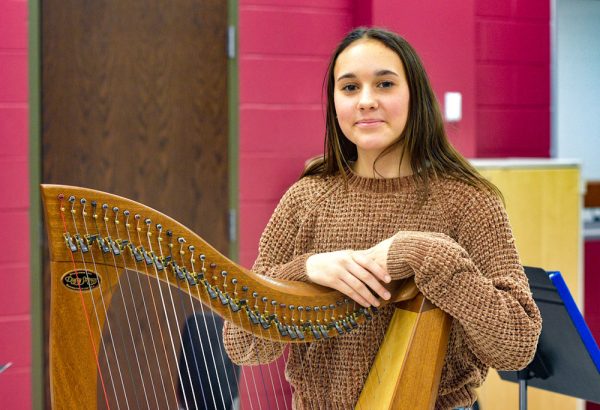 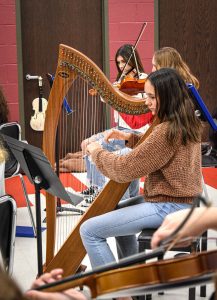 The Port Clinton High School music department has the distinction of being the only school in Ottawa County with a band, a choir and an orchestra, but there is one more thing that sets it apart in the world of high school music.

When freshman Ava Pluto moved with her family to Port Clinton last May, she brought with her years of harp playing experience. She began playing harp in third grade when she lived in New Mexico, and her presence in the Port Clinton orchestra has created a year of firsts for her and orchestra director, Adam Murray.

“I wasn’t sure if I could join the orchestra because a lot of schools don’t have a harp,” Pluto said.

Although Murray had never taught harp before, he was thrilled when he received news last summer that a harpist would be joining his orchestra.

“There’s nothing in standard education for music teachers that’s geared toward teaching harp,” Murray said. “It was exciting to dive into. I spoke to a lot of harpists and my mentors in the string world.” 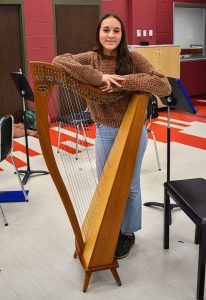 Having a harpist in the orchestra affects Murray’s teaching methodology.

Although Pluto had performed solo in New Mexico, she was excited to play with an orchestra. She enjoyed her first public group experience when the orchestra performed earlier this school year.

Being the only harpist in the group adds another level of stress.

“It’s hard being the only harpist. If you mess up, it’s noticeable,” she said. “But I really like it a lot.”

In addition to her orchestra classes at the high school, Pluto also trains with Julie Buzzelli, an adjunct associate professor of harp at Bowling Green State University.

“We have worked together as kind of a team – Ava, Adam Murray and myself. I have written some orchestra parts for her because a lot of times the music the high school was playing didn’t have harp parts already,” Buzzelli said. “Ava is very talented. It’s been exciting to watch her excel.”

Murray thinks so, too.”

“She’s outstanding. She’s exactly where I need her to be,” Murray said. “She’s learning so much. She’s made extraordinary strides in the last few months.”

With years of training behind her, Pluto is ready to perform for private events. For more information on hiring Pluto to play harp, contact Adam Murray at the high school at 419-734-2147. 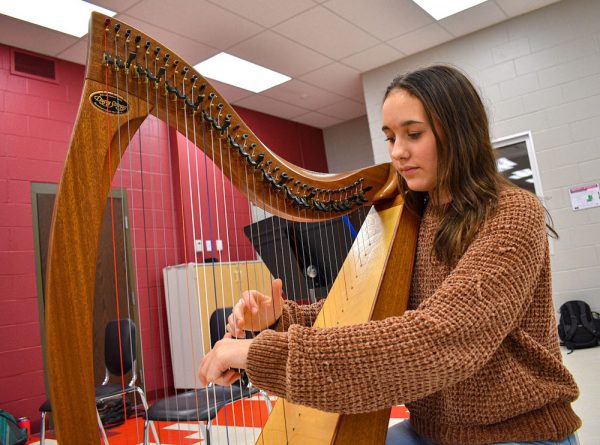 Ava Pluto gives Port Clinton High School the distinction of being the only school in Ottawa County to feature a harpist. (Photo by Sheri Trusty)