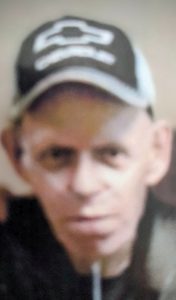 Harry Mullens, Jr., passed away Friday, April 8, at home surrounded by his family. Harry, most often known as Junior or Bones was born in Port Clinton, spent 20 year in Holland, Mich., before returning to Port Clinton. Bones worked at the Meijer Corporation for many years as a Maintenance Worker. He had a love for cars (though anyone who ever rode with him would question his driving skills) and collecting coins. He never met a stranger and was a friend to many.

He is Survived by His Son, Robert, Mother, Alberta, Brothers, Charles (Sandy), Herb (Sharon), Sister, Darlene Fahey, Stepson, Joseph Marlow and many Nieces, Nephews and Cousins. He is also survived by his special Canine friend, Tilly. Bones was preceded in death by his father Harry as well as an infant brother, Roger.

Memorial Services will be announced at a later date. The family would like to thank Tonya, RN, and all of the staff at Stein Hospice for their tender care that was provided for Bones in his final months.

Memorial contributions may be made to the Alzheimer’s Association (www.alz.org).