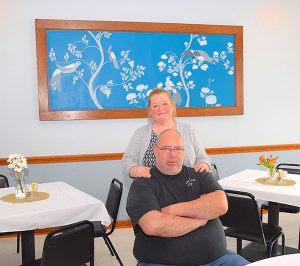 The newly renovated Hartford House Restaurant in the Kuebeler Building on West Water Street in downtown Oak Harbor has only been open for a few weeks, but its All-American breakfast, lunch and dinners have been getting rave reviews.

“When I open a restaurant in a town, I’m here to stay,” said owner Eric Foltz, who has been in the restaurant business for 38 years and owns three other small town restaurants. “I listen to our customers, and try to have something for everyone, whether it is a hot breakfast, a sandwich for lunch or steaks and chops for an upscale dinner.”

It wasn’t easy getting started in Oak Harbor. The restaurant space was spacious, but “it was really worn down, and had water damage,” said Foltz. “It took a full crew of 30 to 40 people about six months to renovate it.”

Foltz and his partner, Pepper Richardson, also own the Cold Creek Cafe in Castalia, Invention Restaurant in Milan, and Cravins in New London.

They have a food truck to service fairs and festivals, a thriving catering business and serve meals at events at the Ottawa County Fairgrounds and Toucans in White’s Landing.

“It takes a lot of excellent employees to make all of this happen, and we’ve have a couple of employees who have been working for us for 30 years,” said Foltz.

He’ll also have his son, Hunter Foltz, 18, on hand full-time after he graduates next month from EHOVE Culinary School.

“Hunter is a good two decades ahead of a regular Joe off the street,” said Foltz.

The farm-to-table concept is in play every day at Hartford House Restaurant.

“We don’t want stuff coming out of a can, or out of a freezer,” said Foltz. “Cooking from scratch is important if meals are going to taste fresh. We’re an All-American style restaurant and some of our favorites are our meat loaf, tri tip roast beef sandwiches and burgers, as well as steaks and chops. We’ll soon be adding the seafood buffet that has been very popular at the Cold Creek Cafe, and we’re getting a lot of local people for our Sunday morning buffet.”

A secret to his success, said Foltz, is to become a member of the community.

“I feel that I know every person walking down the street in Castalia, Milan or New London, and I want to meet everyone in Oak Harbor,” he said. “I shop locally, whether it was the hardware store most every day when we were renovating Hartford House Restaurant, or Hasselbach Meats when we need top quality beef or pork.”

“A lady came in for dinner the other day and wanted a chicken sandwich. We had chicken dinners on the dinner menu, but no sandwiches,” he said. “Well, now we do.”

Foltz feels his restaurant will quickly become a destination for many, whether they’re competing at The National Matches at Camp Perry, bird watching at Magee Marsh Wildlife Area or making the short trip from Port Clinton, Marblehead or Genoa.