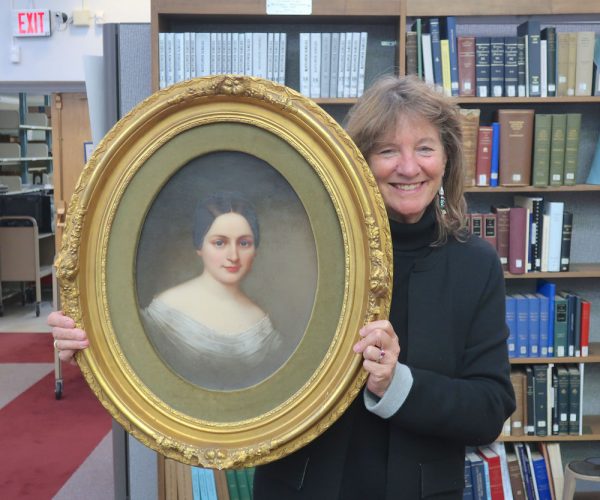 A descendant of President Rutherford B. Hayes has donated an original portrait of the president’s beloved sister, Fanny Arabella Hayes Platt, to the Hayes Presidential Library & Museums.

Lisa Westwater of Columbus had loaned the oval painting, which focuses on Fanny’s face, to Hayes Presidential earlier this month after she had loaned it to the museum for the recently ended special exhibit “Women of Spiegel Grove,” which focused on women’s history.

“It was so clear to me that I was supposed to give the painting to the museum,” Westwater said.

Westwater’s grandmother was Fanny’s granddaughter. The painting passed through the family to Westwater, in part because Westwater shares a birthday with the president, and her middle name is Hayes in honor of her familial connection to him.

Fanny was two years older than the president and was very close to him. She worried about his health, career and love interests and checked in with him often.

Although Fanny was very intelligent, she, like many women of that era, did not have the opportunity to attend college. Instead, she wrote to her brother often while he was at school and encouraged him to pursue his academic studies and stay focused on them. She was a voracious reader and started her own book club for women in her hometown of Delaware. She also attended educational lectures and musical performances.

In 1856, Fanny died after suffering from illness for nearly a month after losing her twin daughters right after childbirth. She was 36.

“My dear only sister, my beloved Fanny, is dead!,” the president wrote in his diary. “The dearest friend of childhood…the confidante of all my life, the one I loved best, is gone.”

The closeness between the two is one of the reasons Westwater felt Fanny’s portrait should be at Spiegel Grove.

Over the years, Westwater stored the painting in her basement and wrapped and preserved it as best she could. Last year, she decided to see if Hayes Presidential would want it, and her timing coincided with the special exhibit.

After the exhibit ended, she took the painting home with her to have it appraised and complete the paperwork to donate it to Hayes Presidential. On her way back to Columbus, she took a wrong turn and ended up driving through Delaware, which was Fanny’s and the president’s birthplace. Westwater drove by the new statue of Hayes there with Fanny’s portrait carefully buckled in the backseat.

“The primary mission of our collection is to preserve artifacts from President Hayes and his family,” said Kevin Moore, curator of artifacts. “The donation of this painting helps us fulfill that mission because it is a beautiful piece that captures the likeness of Fanny Arabella Hayes, who played such a critical role in Rutherford’s life.”