Theresa Gavarone was making her first swing through Ottawa County on Monday afternoon as the county’s state senator. There was little doubt the Bowling Green attorney was enjoying the trip.

“Ottawa County is so fascinating, I just love it out here,” said Sen. Gavarone, especially considering it was a Republican love fest at Schedule Arboretum and Gardens in Elmore. The House member had been appointed to Sen. Randy Gardner’s seat after he had been named Chancellor of the Ohio Department of Higher Education, a Gov. Mike DeWine cabinet post.

Sen. Gavarone, a Republican, was invited to Ottawa County by its trio of commissioners, Mark Stahl, Mark Coppeler and Donald Douglas, all Republicans.

“There’s something about the quality of life enhanced by Lake Erie,” said Sen. Gavarone. “Every time I’m in Ottawa County, it feels like I’m on vacation. I love taking photographs and sending them to our kids, just to show them the wonderful views here.”

She said she is looking forward to the larger responsibilities of being an Ohio senator.

“As a representative, I was responsible for all of Wood County,” Sen. Gavarone explained. “Now I am the senator of a much larger territory covering all of Wood, Ottawa and Erie counties and parts of Lucas and Fulton counties.

“There’s much more responsibility, but I know I’m up to the task.”

An attorney, Sen Gavarone and her husband, Jim, also own a family business.

“The first order of the day for me will be to continue the good work done by Sen. Randy Gardner, especially when it comes to Lake Erie and clean water. Randy worked so well with the agricultural community, scientists and the environment community. I’m looking forward to do doing the same.”

Sen Gavarone said that as an attorney, she worked with families that experienced drug addiction, mental health issues and access to care.

“A lot of legislators in Columbus are concerned about those issues, and finding solutions,” she said. “I’ve just introduced legislation, SB 55, that would increase the length of sentences for drug dealers who sell in the vicinity of a rehabilitation center, wanting to keep addicts hooked.”

She said she has been working well with the DeWine administration.

“There a whole different dynamic,” she said. “DeWine is very engaged, and we see him quite a bit at the statehouse. There’s been a lot of communication with his administration.” 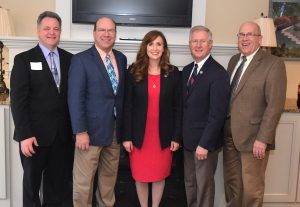