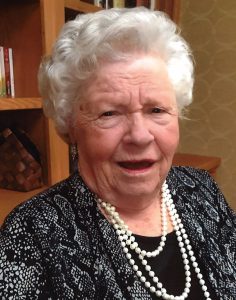 Utica, NY, at age 5 and graduated Utica Free Academy as Vice President of the Class of 1943. Shortly after graduation she met her future husband, Bobby, at a USO dance sponsored by the YWCA. At that time, Bob was attending nearby Hamilton College in the Army Air Corps Pre-Meteorology Program.

Helen and Bob were married in Utica three years later at the end of WWII and lived in Akron, where Helen helped Bob complete his education. After her third child was in school and all her spare time was being consumed with volunteer activities, Helen started a successful career in selling real estate.

In 1968 Bob, Helen and son, James, moved to Port Clinton where she opened Helen McConnell Realty and became active in many civic organizations, usually becoming President. She was the first woman president of the Port Clinton Chamber of Commerce and was voted 2001 Woman of the Year for Port Clinton Business and Professional Women’s Club. She was the lead in many Playmaker’s Civic Theatre productions. She was in her 70’s when she gave her last performance in Grace and Glorie, a two-actor play. Helen served on various committees for United Methodist Church and was the President of the Ottawa County Humane Society when it acquired the Christy Chapel Road property.

Helen was preceded in death by her parents, Olive and Ralph Kinne, her husband of 73 years, Bob, and sister Jean Franz. Survivors are her son Robert (Candace) of Cuyahoga Falls, daughter Peggy of Port Clinton, and son James (Kristi) of Wilsonville, Ore., seven grandchildren and eight great grandchildren.

Family thanks Commons of Providence Memory Care for their kind service for the past 5 years.