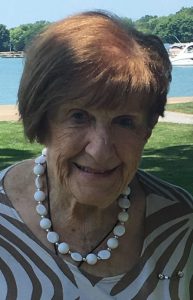 Helen S. “Skeets” Witker, 99, of Lakeside, passed away Tuesday, Aug. 2, at Magruder Hospital, Port Clinton. She was born Dec. 13, 1922, in Massillon, the daughter of Ralph and Thelma (Nolan) Snyder. She graduated from Devilibis High School in Toledo, and St. Vincent School of Nursing in Toledo. She married Dr. Jack C. Witker on Jan. 8, 1944, and they moved to Lakeside in 1947 where she has resided ever since.

Helen was a RN at Providence Hospital, retiring in 1992. She was a member of St. Joseph Catholic Church in Marblehead where she was active in the Rosary Society, Catawba Island Club, Port Clinton Yacht Club, Oak Harbor Golf Club, Port Clinton Golf Club, the St. Vincent’s Retired Nurses and her beloved P. E. O. Chapter A.I. Sisterhood which she attended most meetings.

She was a wonderful golfer and one of two remaining charter members (Madge Davids) of the CIC Golferettes, now the Woman’s Golf Club where she had a hole-in-one. Bridge was her other passion and she played into her 90’s until her eyesight changed. Her family and religion were everything to her. She never missed any parties.