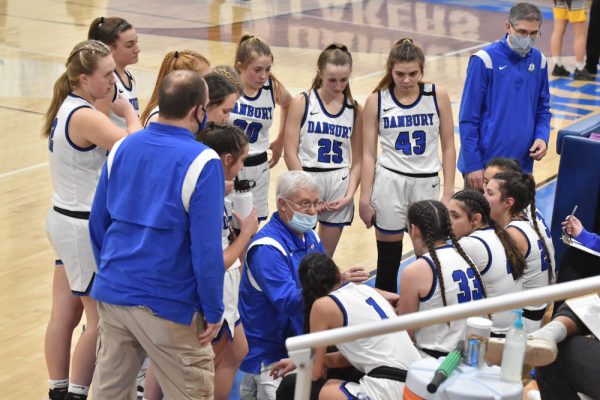 One of the area’s best coaches is calling it quits.

Danbury girls basketball coach Dick Heller is retiring after 44 years in the profession, leaving in part due to do away with the high demands of the job in order to spend more time with his family.

“I’m getting to the point where I’ve put in a lot of time. It’s sort of a cliche to say it felt like the right time. I just went through a period of time with the Covid-19 situation, and it opened my eyes to life. I sat back and thought about things,” Heller said. “I have three grandkids that I don’t get to spend a lot of time with; and basketball becomes a year-round thing. It’s been about 44 years that I’ve cut short my family on Thanksgiving and Christmas. That was part of it.

“The other thing is that I felt like it might be at the point where the kids might need someone with new ideas. There are a few things in the season that seemed to indicate to me that maybe it was time to step back and turn it over to someone else.”

Heller, who was an assistant at New Riegel before coaching the Lakers for the past five seasons, was a head coach for a total of 27 years. He was the head coach at Oak Harbor for 10 years and worked there as an assistant for two years before that. Heller also coached at Lakota for 24 years, 12 of them as the head coach. He notched 337 victories, including 47 with Danbury. Heller’s teams won five league titles, two with the Rockets in the Sandusky Bay Conference, and three with the Raiders in the old Suburban Lakes League. He also oversaw Oak Harbor winning 46 consecutive regular-season games from 2002-04.

Heller’s teams were always among the best in the conference, whether it was the SLL, SBC or SBC River Division. At Lakota, the smallest school in the SLL, his teams had some great battles with Eastwood, coached by Jim Graycik, and Woodmore, coached by Mike DeStazio, two legendary coaches.

“It was a battle,” said Heller. “We got after each other, but we were okay after the game.”

One of the high points of Heller’s career came in 1996 when Lakota won a district championship before falling in the regional semifinals to Wauseon, who would go on to win the state championship. 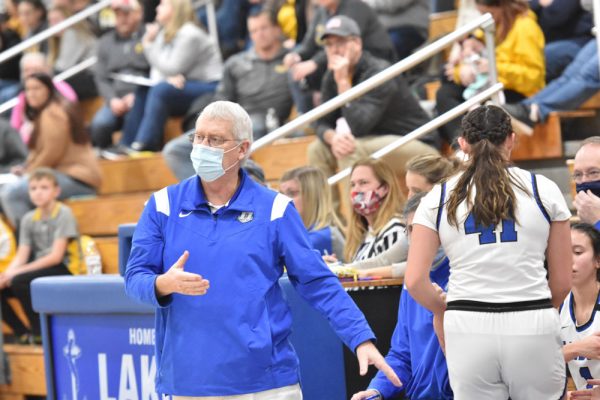 Dick Heller steps down after 44 years of coaching bgirls basketball.

“We’re playing Carey in the district finals and one of my starting players before that broke her finger and couldn’t play. But our kids played really well — our injured player was our inspirational person — we beat Carey, and we had to play Wauseon in the regional semifinals,” he said. “They went on to win state that year, and we lost to them by about 10 points. They won all of their other games in the tournament by more than 10 points.”

Heller made quite an impression on the Marblehead community during his time as coach of the Lakers.

“He came in and did an excellent job, building on each year. He worked so hard throughout his time at Danbury. I’m sure that’s been the case wherever he’s been. He always had the kids ready to play,” said Danbury athletic director Keith Mora. “He would always send motivational messages to the girls and check in with them on a personal level. It shows that it’s more than just a game, it shows that he’s concerned about the girls doing well. A reassuring message after the game, that was something he took care of. That was something that was cool to see, he was always trying to be uplifting for them.

“He’s certainly left Danbury in a good place. The girls’ skill level was getting higher and higher, so now it’s a matter of us finding the next candidate and building off that. We’re very thankful for the time and effort he put in, and all the investment that he gave to our kids and the community.”

Heller loved coaching both boys and girls teams, and appreciates the efforts of his assistants.

“I can’t say enough about the players I’ve had over the years,” said Heller. “They’ve worked hard, developed skills, had that spirit in them, and they always seemed to come together. Whatever success, it isn’t mine, it’s all the players that I’ve been able to coach and work with. Whenever someone has been down, the players have always rallied and supported each other. That was never more evident than this past fall when I was in the hospital with COVID. The messages I got from the team, the community — it’s things like that that mean so much. I’ve been blessed over the years, the students I’ve coached and taught. The experience, the connections, the relationships are the things I’ll cherish. I’ve enjoyed it, I’ve learned from it and hopefully I’ve been able to help the kids.”