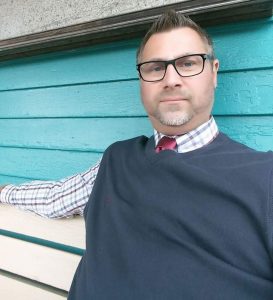 James Hensley is a popular musician hailing from right here in Port Clinton, and he’s going to have one of the busiest weekends of his singing career coming up this weekend. Hensley, who began his career playing with The Munch Band from Oak Harbor before venturing to Bowling Green, Ohio in 1997 and forming the beloved college rock band Crazy Eddie.

Hensley came back to Port Clinton in 2003 and, in 2006, he got the Crazy Eddie guys back together and formed local favorite The Junk, which still plays around the area. Hensley also plays in JK RAZZ and you can find him playing solo here and there throughout the summer. He also fills in on bass and guitar for other local favorites Corduroy Road and Bar Code.

To start the weekend, on Friday night, July 15, Hensley will take over the RiverFront Live! Stage on Madison Street in downtown Port Clinton at 5-6:30 p.m. He’ll then get on the MOM Stage at 8 p.m. with old friends Corduroy Road.

On Saturday, July 16 it will be Hensley and The Junk at 8 p.m. on the MOM Stage. On Sunday, July 17 it’s an afternoon gig at the Orchard Farm Stand on the Catawba Peninsula.

“It sure wasn’t this way back when I started out in Port Clinton about 28 years ago,” said Hensley, with a laugh. “Back then, we had two or three places that had live bands. Now we’ve got 20 places right around Port Clinton with live music.

“Port Clinton’s scene has really changed, and the MOM Stage is something special. Port Clinton is still tweaking things, but the music scene is really going well,” said Hensley.