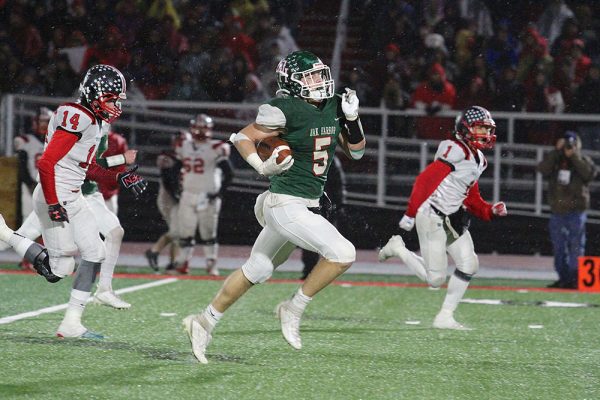 One of the most memorable classes of senior football players had graduated this year from Oak Harbor High School, including scintillating running back Clay Schulte. Despite being in a rebuilding year, Oak Harbor was still ranked among the top this year in the Sandusky Bay Conference. (Photo by Julie Overmeyer)

With the departure of one of its greatest senior classes in program history, Oak Harbor would appear to be a rebuilding football squad.

But the media and coaches both picked the Rockets to finish third in the Sandusky Bay Conference’s Bay Division, a sign of the respect both have for the team. In the media vote, Huron was first by a comfortable margin, accumulating just four points. Port Clinton was second with 11 points, followed by Oak Harbor (12), Edison (13), Vermilion (20) and Willard (24).

The coaches, meanwhile, have the Tigers, Chargers and Rockets within one point of each other at the top of the division. Huron had six points, Edison had seven and Oak Harbor finished with eight, followed by the Redskins (13), Sailors (17) and Crimson Flashes (24).

“We return 17 lettermen. We have nine starters back on offense and six starters back on defense,” said Port Clinton coach Beau Carmon. “All five of our offensive linemen started at least two games last year.

“We gave up the most points since 2013 last year. We were hit by injuries. We lost running back Cooper Stone and quarterback Colton Klima. We have 45 kids in grades 9-12, so we are down numbers-wise. We feel like we have a pretty good football team. I think it’s going to be a great year for the SBC.”

Oak Harbor coach Mike May is now in his 13th season coaching the Rockets.

“We were fortunate to have a nice season (last year). We’ve been able to build some momentum. Our numbers are up and I think that has to do with the pandemic,” said May. “We have 12 seniors, 11 juniors and we’ll probably end up with 60 players in grades 9-12. I’m excited for our senior class. We have a lot of kids that played a lot of football the past few years.

“Defensively, we have five starters coming back, and seven started some games because of injuries. We have guys like Dylan Schiets, who tore his ACL last year, and Ryan Ridener, Jack Zeitzheim, Ashton Schroeder and Collin Fauver. On offense, Ridener is our H-back and Fauver is our running back. We feel like we have some good size in our offensive backfield.”