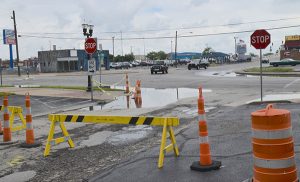 Monroe Street in downtown Port Clinton is one of 17 areas in the city that have been negatively impacted by high water this year.

Port Clinton officials are reaching out to state and federal agencies for help with a high water crisis that has been damaging the city’s sanitary sewers and storm sewers. There are 17 different areas around the city that have been impacted, and estimates to repair them have topped $7.5 million.

“We have been investigating plans to mitigate the high water along the Port Clinton shoreline in the downtown area,” said Port Clinton Safety-Service Director Olen Martin. “We recognize the impact the flooding and high water is having on our downtown businesses and we’re working to handle the prob-lem in the best ways that we can.”

Monroe Street in the Veterans Park area has been among the most visible, with standing water that is at the same level as the nearby Portage River. Lake Erie and the Portage River are at record highs, and US Corps of Engineers officials forecast Lake Erie will only drop a few inches in July.

“Monroe Street is going to be cordoned off for quite a while, like the Port Clinton City Beach, where fencing is still up,” said Mayor Mike Snider. “We had to block that section of the beach because of an exposed utility line.”

City officials have installed Jersey Barriers at the city beach. While normally used to separate highway traffic during road construction, they can also be used to break up destructive wave action.

The downtown infrastructure is the major concern, said Snider. “We need to bring in ground-penetrating radar and core sampling equipment to understand the damage that has already been done,” said Snider. “We’re working with Ottawa County officials, but the bottom line is that we simply won’t know what we don’t know until more studies are done.”

Port Clinton officials have been reaching out to state and federal agencies for funding to repair the damage, but the city must first exhaust its fiscal resources. That, said the mayor, could happen very quickly.

“We have areas around the Port Clinton Drawbridge where the water in storm sewers is flowing backward, and pooling in the sewers,” said Snider. “Those storm sewers are old, leaking and causing underground erosion.”