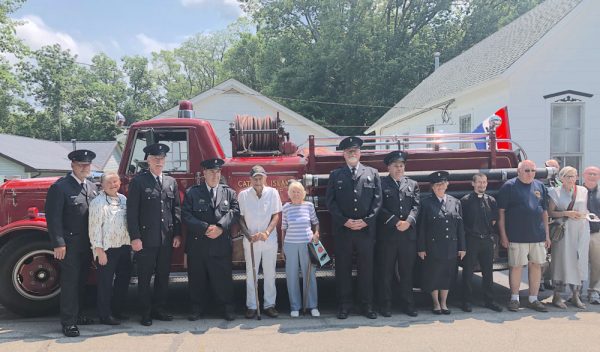 Firefighters, friends, and family have celebrated the 90th birthday of Don Rhodes, a Catawba Island area historian, founder of the Catawba Island Volunteer Fire Department (CIVFD), and Emeritus Trustee of the Catawba Island Historical Society. Rhodes was surprised with a party at Union Chapel Museum, as members of the CIVFD arrived on both of their fire trucks in dress uniforms, to make it a “Two-Alarm” celebration.

Rhodes was born July 16, 1931, in a small wood-sided building that used to be a White Horse gas station his father built on NW Catawba Road, not far from the entrance to what is now called the Sunnyside Tower Bed and Breakfast Inn. 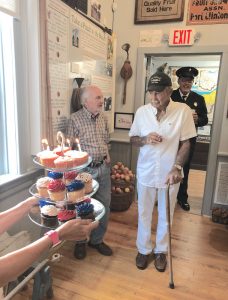 Except for serving four years as a U.S. Navy submariner during the Korean War, he has lived his entire life on Catawba Island. He and JoAnn, his wife of 69 years, have spent over a half century at the corner of NW Catawba Road and E. Porter Street.

It is the first and only residence they have owned since their 1953 marriage at Little Chapel Around the Corner in Las Vegas, Nev.

Most people recognize the Rhodes residence because the main house, constructed in 1905, is flanked by a log home and several other rustic outbuildings. These additional structures provided a showcase and storage for the eclectic collection of local antiquities and memorabilia the Rhodes had acquired over decades. They displayed and sold them under the banner of Ottawa City Museum and General Store, a business they opened on site in 1976, and operated for 40 years.

Much of their collection is now on display at the Catawba Union Chapel Museum, a few hundred yards further east on Porter Street.

Rhodes is often at the museum, which is open from 10 a.m. to 4 p.m. on Monday, Wednesday and Thursday, and the second and fourth Saturdays between mid-May and mid-October. Stop by to wish him a belated happy birthday and have him share some of his fascinating and fun stories about growing up on Catawba Island.

Union Chapel was built in 1888 to serve as a non-denominational Sunday school for area children. Dwindling attendance ultimately led to closure. To preserve the iconic structure, ownership was transferred to Catawba Island Township in the 1990’s. The Township leases the building to the Historical Society for use as a community museum and cultural center which opened in June of 2018.