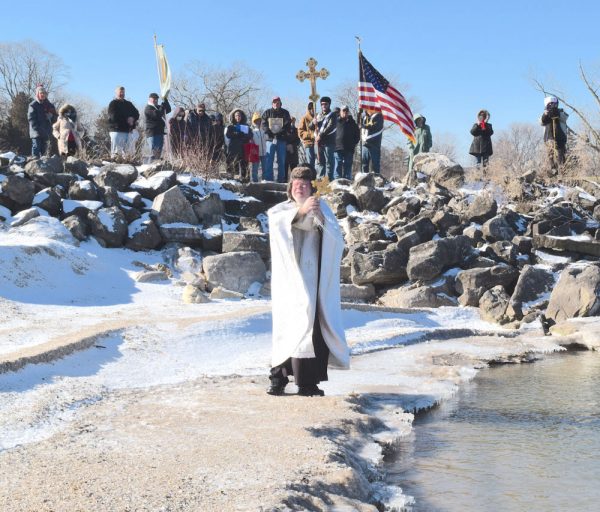 Holy Assumption Orthodox Church has been a bastion of faith in the Village of Marblehead, and its iconic stone house of worship is getting ready to celebrate its 125th anniversary as a parish in 2023. But one important aspect of the Orthodox Church had been missing in Marblehead until Rev. Andrew Bartek arrived five years ago to minister to its flock.

The Blessing of Lake Erie.

“There is so much history here with Holy Assumption Orthodox Church, but when I first came to Marblehead, I was very surprised a mainstay of the Orthodox Church, the blessing of an important lake in the parish, had never been celebrated here,” said Rev. Bartek.

“There are many towns around Lake Erie that celebrate the Blessing of the Fleet most every year, but Orthodox Church tradition calls for an annual Blessing of the Lake,” said Rev. Bartek.

On Saturday, for the third time many members of the parish gathered at the stately church on East Main State in downtown Marblehead, which is best known as the home of the popular Halupki Festival on the third Sunday of August. Despite biting frigid winds, about 50 parishioners and visitors had bundled up in their winter best and marched single file under sunny skies with Rev. Bartek to Clemons Park, singing hymns and leaving behind a trail of incense. 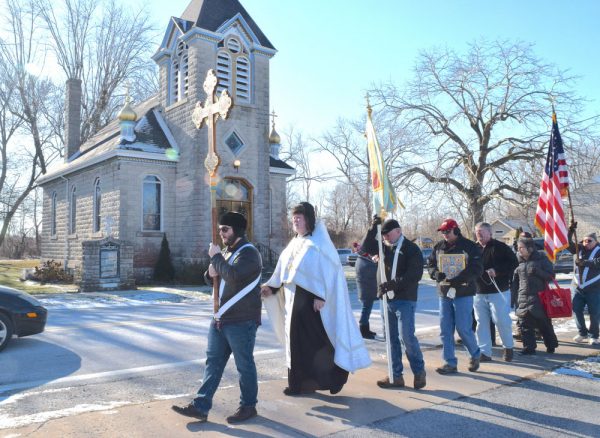 Parishioners and Rev. Andrew Bartek of Holy Assumption Orthodox Church in Marblehead march to the Lake Erie shoreline at Clemons Park on Saturday to celebrate the Blessing of Lake Erie. (Photo by D’Arcy Patrick Egan)

As church members watched from a small buff overlooking a little bay on the Clemons Park shoreline, Rev. Bartek carefully worked his way down a small trail to the crusty shoreline to lead in traditional prayers and hymns as he cast a golden cross into the waters, retrieving it time and again, and anointing celebrants with holy water.

Wrapping up the noon ceremony, everyone gathered in the basement of Holy Assumption Church for hot soup, coffee and cocoa and sandwiches.

The members of the parish are mostly elderly, many who emigrated from Eastern Europe to Marblehead after World War II to work in the stone quarry, local orchards and on Lake Erie fishing boats. The old timers revel in the history of their little village, and have embraced the enthusiasm of their pastor.

“In the five years I’ve served here, I’ve found Marblehead to be a very warm and welcoming community,” said Rev. Bartek, who is also chaplain of the Marblehead Police Department. “This is a very tight-knit parish. I’ve served in big cities, such as Chicago, but have most enjoyed the smaller villages.”

Marblehead is certainly a small village, but Rev. Bartek is formulating a large celebration for the 125th anniversary of Holy Assumption Orthodox Church in 2023, including inviting the bishop of the Orthodox Church.

“That would be a very big thing for the small village,” said Rev. Bartek. “We’re talking about a historic marker for our church and a variety of social events, and a parade to mark the 125th anniversary of the oldest Orthodox Church in Ohio.”