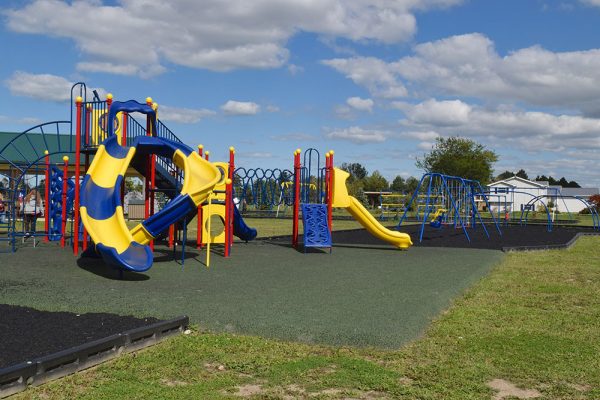 The colorful playground has already lured crowds of children eager to play on the slides, swings, seesaw and even a pint-sized climbing wall.

Lorraine Zimmerman had a dream of creating a playground on her late parents family farm in Bay Township, encouraging families and children to enjoy the fields where Raymond and Delores Hopfinger once grew corn and soybeans.

“I had the plans in my head for a long time. In 2016 my husband, Jack, and I finally took the big step. We created a non-profit company, and with the help of many of our friends and family, we began construction on the Hopfinger Zimmerman Memorial Park,” she said, honoring her parents and Jack’s parents, the late Pete and Joan Zimmerman.

The 80-acre park is on West Oak Harbor Southeast Road, just west of Route 53, and was opened to the public on Memorial Day weekend marked with a large stone sign at the entrance.

The adage that if you build it — and built it right — they will come was certainly true.

It took many months and a lot of sweat equity, admitted the couple, because of the many ingredients they felt were needed to make their park into a showplace. Surprisingly, they never thought about charging families to enjoy the park and its brightly-painted array of playground equipment that includes slides, swing sets, a merry-go-round, seesaws and jungle gym.

Or swim in the winding 3 1/2-acre lake, cast a lure for bass or bluegills, and enjoy the paddle boats. The spacious dog park on the north side of the new park is a welcome grassy field for canine fun.

“People who bring their kids to enjoy the park are often surprised there is no admission fee. Or a rental fee to use the new Boots Heilman Pavilion,” said Lorraine. “We didn’t build this park to charge people to have fun.”

The couple wanted a community park they could be proud of, and they’re happy when the parking lots are full and the kids are having a ball on the equipment.

The climbing wall is kid-sized at about 6 feet tall, and all of the playground equipment is perched on six to eight inches of rubber mulch, preventing skinned knees or elbows.

The 3 1/2-acre swimming and fishing pond, where paddle boats are waiting, was popular during the hot summer months. 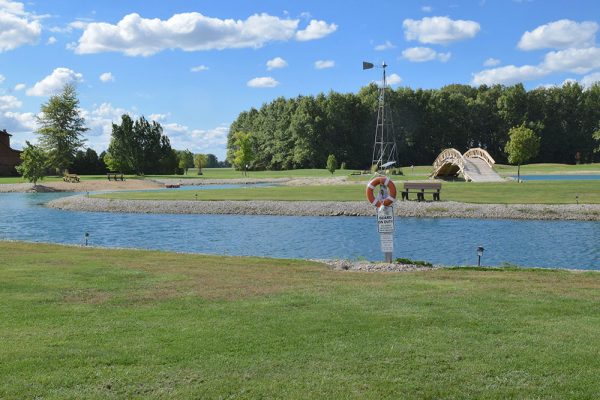 A 3 1/2-acre pond was a cool location during the hot summer months, especially the paddle boats.

“A woman arrived the other day with a little girl, who was about four years old,” said Lorraine. “The girl was in awe of the playground. She was so excited she was jumping up and down, not knowing where to start.”

The couple has owned Zimmerman Paint Contractors of Fremont for 37 years, which specializes in highway, airport and parking lot striping services. It was nice to have a lot of friends in the construction business when they started building the park.

“The Ohio Contractors Association put in our roads and parking lots, and an electric contractor removing some light poles on I-475 thought about us, and brought them to the park to be converted into flagpoles,” said Jack. “The playground equipment was considered worn out by the Fremont School District. Now it looks brand new.”

There were plenty of working weekends, with friends camping out at the Zimmerman’s to help. Neighbors started a GoFundMe that kicked in $5,000 for the project.

“We’ve gotten donations that have ranged from a few dollars to $1,000 from a neighbor,” said Lorraine. “But we’re a non-profit. Jack’s brother, Dan Zimmerman, is president of the board of directors, and I’m the vice-president. On the board are successful local business people like Jake Dunfee of Shrock’s Marina on Marblehead.”

The park’s popularity has tickled the Zimmermans, and they enjoy the crowds of kids at play. Word is getting out that the park and its pavilion is an ideal location for weddings and family gatherings. The wide-open spaces allow social distancing in this time of Covid-19.

“We’re probably going to have to create a reservations list for those types of events,” said Lorraine. “It’s been nice to see a lot of family reunions already, which our park pavilion can easily handle because it’s twice as large as most pavilions.” 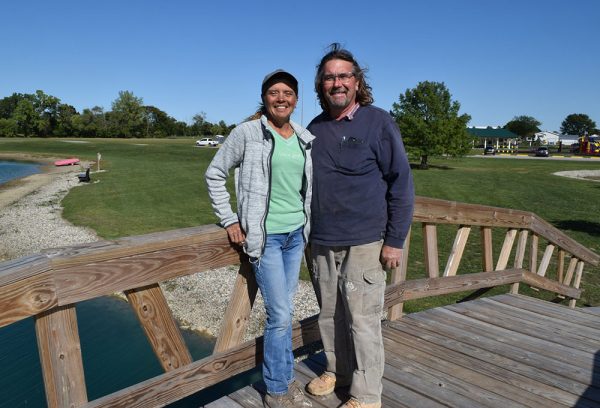 Jack and Lorraine Zimmerman get a bird’s eye view of their Hopfinger Zimmerman Memorial Park community playground from a beautiful bridge over the park’s swimming and fishing pond. (Photos by D’Arcy Egan)

After all of that work, the Zimmermans are not done.

“I want to put in hiking trails on our property across the road, and build the biggest sledding hill in the three-county area there,” said Lorraine, with a laugh. “But first, we’ll probably put in a basketball court.”

Jack knows she is serious.

“She works me like a rented mule!” he said, smiling.

Family is important to the couple. They named their pavilion after Boots Heilman, the late grandfather of Brittany Christiansen. She was the flower girl for the Zimmermans when they got married, helps with social media for the park, and her mother, Terry Sparks, is one of Lorraine’s best friends.

A goal has been to make the park as maintenance-free as possible, with state of the art trash cans, porta potties and solar lighting.