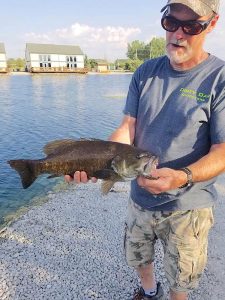 Before I start this week’s report, I would like to talk about something that happens on the lake whether you are trolling or drifting and casting lures. A lot of people do consider what location they are fishing. Location makes all the difference, which has been the case this week. When out fishing, the location where you choose to cast or troll can make a world of difference.

If the fishing isn’t the greatest at that point, then you are going to want to move until the bite increases.

The weather conditions lately have been perfect for casting and drifting for walleye. Casting for walleye seems to be at an all time high right now and the number of boats that have been out on the water is only further proof that casting is the way to go.

With all the boats out casting, it makes trolling more difficult and aggravating for other boats just because of the traffic from all the boats. Most trollers have been heading to the dumping grounds at Cedar Point. The bite there has been fast and furious with anglers limiting out in just a few short hours.

The dumping grounds has not had as much boat traffic as other places so if you are wanting to troll, this spot is going to be your best bet. Tru-Trip diving planers with Silver Streak spoons and other popular 4- to 6-inch spoons have been producing big catches. Spoons are being trolled about 35 to 50 feet behind the boat at speeds around 2.0 miles per hour.

Yellow perch fishing has been somewhat spotty lately, but catches have been reported east of Kelly’s Island in around 35 feet of water. When fishing for perch, you will want to use crappie rigs or perch spreaders, the hooks baited with nightcrawlers or minnows.

Catfish, the second hottest species of fish lately, have continued to grow as a favorite among anglers. Sandusky Bay has been producing huge numbers of catfish with no signs of the bite slowing down anytime soon. Over the last few weeks, nightcrawlers and raw shrimp have been the best baits to use.

Each week as I do this report, I try to give you pointers on not only where to fish but how to fish. Seven days a week, boaters are out casting and trolling. Going to the right place and fishing the best way is the key to bringing home a limit of walleye.

The mayflies are making a difference in the fishing as well, with a huge hatch giving baitfish and game fish plenty to snack on. Since we have had the mayfly hatch, the walleye and other game fish can be found much closer to the surface of Lake Erie, feeding off the larvae as they hatch and making the fishing better.

I hope everyone had a great Independence Day holiday. Port Clinton was alive with many, many people over this last week. As always, be safe out there, have fun, and most importantly, use your head while you are out there. Keep a tight line!