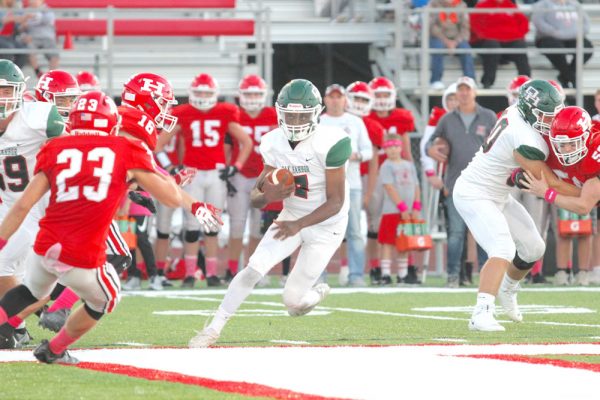 HURON – In a competitive, back-and-forth game, a handful of key plays determined the outcome in Huron’s 21-14 victory over Oak Harbor on Friday night.

The Rockets (4-3, 1-1 Sandusky Bay Conference Bay Division) shot themselves in the foot too many times, and the host Tigers (4-3, 2-0) won the turnover battle 4-0, which proved to be the difference in the game. 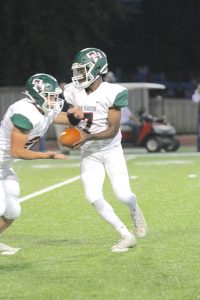 “Anytime you have four turnovers in a game, it is very difficult to win. One of the biggest ones was the interception in the end zone on our first drive of the game,” said Oak Harbor coach Mike May. “Our defense did a good job overall in those situations in the first half by keeping Huron from scoring in the red zone. We also had 10 penalties that set us behind the chains on some key drives.”

Huron opened the game with the ball and was stopped, and Oak Harbor drove to the Tigers 13-yard-line. On first-and-10, Jaqui Hayward’s pass went off the hands of Dalton Witter, and was intercepted by Cooper Norwell. Huron had some missed opportunities, but the Rockets were unable to score in the first half.

The scoreless tie was broken early in the third quarter when Witter scored on a 3-yard run, and Cade Petersen’s extra point made it 7-0.

But Huron scored three consecutive touchdowns to take control, and held off Oak Harbor from there. The Tigers’ first score came on a 3-yard touchdown run by Dawson Bowen, and with the game tied at 7-7, Andrew Delaney took a screen pass from Dylan Hohler and raced 63 yards for the touchdown to make it a six-point game before Abram Fortune kicked the PAT.

Hohler would score on a 45-yard touchdown run less than two minutes later with 3:50 to play, and the Rockets were unable to seriously threaten after that.

“We definitely missed some opportunities on offense and we let them off the hook on some key third downs in the second half on defense,” said May.

“Their quarterback is one of the best football players that we have faced this season,” said May. “He gave us problems both throwing and running the ball.”

“We face a very physical and well-coached Edison team this week,” said May. “The Edison game is always a tough matchup. It will be important for our defense to play disciplined football versus their option offense.”