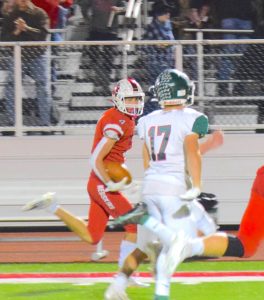 Wide receiver and linebacker Josh Hurst (4) earns first-team honors at both positions in the SBC.

Josh Hurst has had a fantastic season and he was rewarded for it, earning the Sandusky Bay Conference Bay Division’s Most Outstanding Performer honors.

Hurst has led the Bay Division with 48 catches, 754 yards and 17 touchdowns in the regular season. He also finished with 66 tackles, six sacks and four interceptions.

He led the Redskins to the Division IV regional semifinals, where they’ll play Perkins on Friday at 7 p.m. at Strobel Field in Sandusky.

“It was actually the day the rankings came out when I found out at about 10:30 p.m.,” Hurst said. “I was at my desk doing homework, and Coach (Beau) Carmon called me to let me know.

“It’s a huge honor, the division we play in is no joke. Three SBC teams are in the final four of our region. Edison beat Bellevue, the top-ranked team in the division, and that says a lot about the Bay Division. I said it was Cam Gillum’s award to lose before the season began.”

Hurst was joined on the first team by seven of his teammates, a number of whom earned league honors at multiple positions like Tyler Webb (wide receiver/defensive back), Garrett Cornell (running back/linebacker), Ethan Ranzenberger (tackle), Owen Auxter (defensive back) and Adam Thorbahn (tight end/defensive lineman).

Gillum (quarterback) was also named to the first team, as was Owen Auxter (defensive back), Hunter Shell (guard) and Dylan Snyder (center).

“It’s definitely surreal. A lot of guys on this team are seniors. We all grew up playing flag football, for the Braves youth football program, and middle school football together. We had a vision, we all knew what we could do. The fact that we have 8 of the 13 people that made all-league, and I think five or six of them are unanimous, that’s impressive. That speaks to the talent we have on this team,” said Hurst.

“We feel like there has never quite been a team like this in Port Clinton history. You don’t get teams like this often. We know we have to do our job, and everybody else will follow.”

The ’Skins came in with high expectations this season.

“We’d be at lifting, and Coach Carmon was calling out some of our returning players that he thought would make a big impact. I knew coming into the season, especially with Tyler Webb coming back, that we could be good,” said Hurst. “I’ve never really viewed myself as a big-play threat. I’ve been playing football for so long, and the killer instinct is just natural. The touchdowns came with making plays.”

Carson Ridener was honorable mention at running back, as was Zeitzheim at tight end, Buhro at wide receiver and Schiets at center.