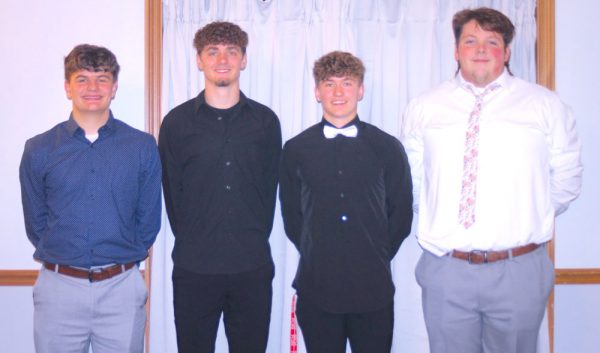 In its most storied season, Port Clinton was rewarded for its efforts.

Hurst, who was the Bay Division Player of the Year, was named to the first team as a wide receiver. The senior set new school records and caught 66 passes for 967 yards and 21 touchdowns.

Also earning first-team status was fellow senior Tyler Webb at defensive back. The shutdown corner often guarded the other team’s best receiver and had four interceptions.

Quarterback Cam Gillum was named to the second team for his efforts. The junior, who broke a number of school records, completed 172-of-259 passes (66.4%) for 2,479 yards and 35 touchdowns and nine interceptions. He also carried the ball 103 times for 327 yards and six scores.

“Coach Carmon called me after the official rankings came out. He told me I got all-Ohio, first team. I kind of expected to get first or second team,” said Hurst. “He told me Tyler got first team — you don’t find a lot of cornerbacks in Division IV that are lockdown corners like him.

“Cam had a great season and Ethan was great, too. It was definitely a great group of guys to play with this season.”

Hurst talked about why the team was so successful.

“I feel like we have 22 guys — 11 on both sides of the ball — that are going to make the plays for what they need to do, whether it’s a guard pulling, or Cam throwing a perfect pass, or one of our receivers making a play.”

Now that the season is over, Hurst and his teammates have had some time to reflect on their accomplishments.

“We just had our banquet, there was a lot of talk about the amazing season. A lot of people in town have congratulated me. They talk about great teams in Port Clinton,” he said. “Our sophomore year, Oak Harbor made it to the Final Four, and we didn’t know if we could reach that. To reach that point, it’s a blessing. We don’t have the numbers that a lot of powerhouse programs have.”