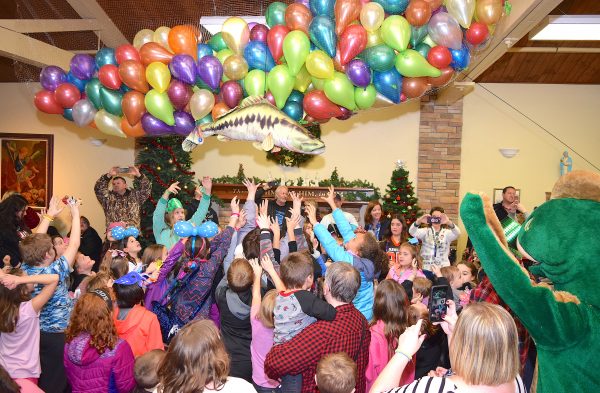 The Minnow Drop at the Knights of Columbus Hall in downtown Port Clinton is the centerpiece of a popular family party on New Year’s Eve with lots of games for the boys and girls. (Photo by D’Arcy Patrick Egan)

For the past several months, the small group of volunteers that make up the Wylie Walleye Foundation has been working to make this year’s Walleye Drop the best Port Clinton New Year’s Eve celebration ever held. The annual event draws thousands of people to the city, making it one of the biggest events of the year.

The Walleye Drop has activities for adults and children, beginning with the Minnow Drop party for boys and girls at the Knights of Columbus Hall in downtown Port Clinton from 4 p.m. to 6 p.m. The free event will feature crafts, games, prizes, food, and a balloon and minnow drop to celebrate the New Year.

Partiers looking for something more potent to drink can hop on one of the luxury buses which will provide free rides to bars in Port Clinton, Catawba and Marblehead during the 4th Annual Bar Swim. The routes’ six stops will include Holiday Inn Express and the parking lot next to the Grist Mill.

New this year to the Walleye Drop are a photo booth that will be set up in the vicinity of Port Clinton Fish Company and an ice sculpting demonstration by Elegant Ice Creations, which will begin at 7 p.m.

“We try to do something different every year, not just sit back and let it roll,” said Wylie Walleye Foundation Chairman Julie Natoli.

Downtown entertainment will include music provided by a DJ and live bands. Port Clinton Mayor Mike Snider will host a Rock, Paper, Scissors tournament. The Walleye Drop will be livestreamed by Buckeye Drone.

Wylie Walleye will drop from the sky during Walleye Madness @ Midnight, followed by a fireworks display over the water. The event creates a memorable New Year’s Eve celebration for thousands, boosts the local economy, and thrusts Port Clinton into the national limelight. It is all possible due to the hard work of the few dedicated members of the Wylie Walleye Foundation.

“A handful of people have put this together,” Natoli said. ““Next year, we want to add even more outdoor events for families, but that will take a lot of work, and we’ll have to recruit more people.”

Free parking for the Walleye Drop is available at the Jet Express and Grist Mill parking lots. More information on the event can be found at www.wyliewalleyefoundation.org.