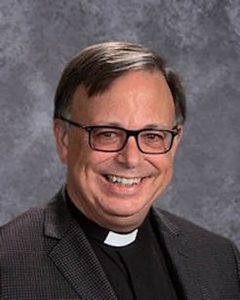 Immaculate Conception Catholic Church has announced that Father Jonathan Wight is the new pastor of the parish, taking over for the retiring Father John Missler.

Father Wight was ordained in 1986 and served as associate pastor at St. Peter’s Mansfield, and then St. Paul’s in Norwalk. At both parish schools he was a full-time high school teacher. He then became the associate pastor at Christ the King in Toledo, where he taught at St. Francis de Sales High School part-time for 14 years.

He then became pastor at St. Hyacinth’s in Toledo and All Saints in Rossford. For the past 12 years, Father Wight has been pastor of Immaculate Conception in Bellevue. Although it is difficult to leave a parish after 12 years, Father Wight welcomed the opportunity to come home to the community where he grew up and to be closer to many family members living in the Port Clinton area.

Father Wight shared just how unique and special his homecoming has been. The Immaculate Conception Rectory was once his grandmother’s home, making his return very special.