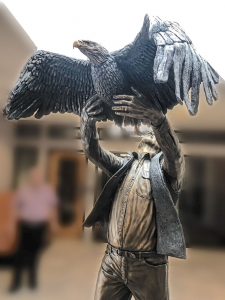 Visitors to The Arts Garage (TAG) in Port Clinton eventually find themselves drawn to a back corner studio where sculptor Andy Sacksteder, covered in bits of wet clay, quietly shapes small busts and life-size works of art. Although Sacksteder has only been working with clay for about 14 years, he has already earned a reputation as an award-winning, internationally-respected artist.

Initially, Sacksteder, who specializes in life-size bronze sculptures, honed his skills on smaller works of art he created in his kitchen.

“You have to play with clay for a while before you do a person,” he said.

Sacksteder created an art studio in his garage but eventually found a more suitable studio setting in the former city garage that has been transformed into a community arts center. The first artist-in-residence at TAG, Sacksteder works around some of the area’s most gifted artists, where painters, photographers and mixed media creators share ideas and voice gentle judgments.

“I love being here at TAG. Everyone is so talented, and I can get really good opinions,” Sacksteder said. “I like everybody here. It’s the most talented garage.”

Sacksteder will compete in ArtPrize, an international art competition that will be held in Grand Rapids, Mich. on Sept. 15 through Oct. 2. The annual competition attracts artists from around the world.

“ArtPrize gives the most money away and has the most artists. It is enormous,” Sacksteder said.

The unique competition is spread across multiple venues in Grand Rapids. Artists work directly with local property owners to secure show space in restaurants, community parks, hotels and even laundromats. 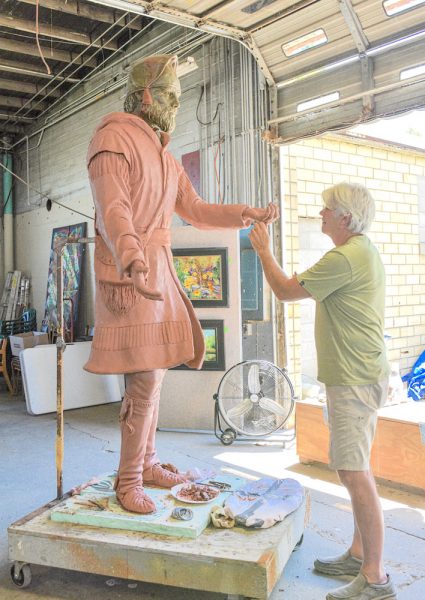 Andy Sacksteder is an award-winning, internationally respected sculptor who enjoys working amongst the artistic energy inside TAG.

“It’s kind of like the dating game. Some venues are better than others. You apply, and they take you if they want you,” Sacksteder said. 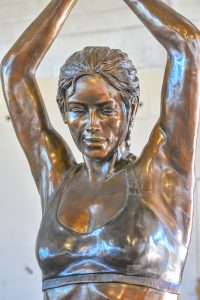 Several of Sacksteder’s works, including this sculpture woman entitled “Tree Hugger,” can be seen in his studio inside TAG. (Photo by Sheri Trusty)

Sacksteder’s sculpture “UPlifting,” which can be seen outside TAG, won third prize at the 2013 ArtPrize competition. This year, Sacksteder will enter “Freedom,” an intricate bronze sculpture of a man releasing an eagle back into the wild. It was one of his most difficult pieces, taking eight months to create because each eagles’ feather had to be individually sculpted.

The “Freedom” sculpture that will compete at ArtPrize is a recast of the original, which was sold to a Westlake business owner before it was completed.

“He came in before I was finished – it was still in clay – and purchased it,” Sacksteder said.

Sacksteder is currently working on a commissioned, seven-foot-tall sculpture entitled “French Fur Trader” that will eventually stand near the northernmost roundabout on Interstate 75, about a mile from the Canadian border.

In addition to “UPlifting,” two more Sacksteder sculptures have found new homes. “Last Man Standing,” honoring the soldiers of WWII, can be seen at Schedel Arboretum & Gardens in Elmore. “The Lightkeeper” keeps constant guard at the Port Clinton Lighthouse in Waterworks Park on the Lake Erie shoreline.