Ironworkers explain benefits of learning a trade to Vanguard students

Trade schools are thriving around Northwest Ohio, and for good reason. The young men and women who complete a course of study in a trade and are accepted for an apprenticeship in a wide range of job categories are finding both personal and financial success.

Rob Monak of Ironworkers Local 55 organized a meet and greet between students and steelworkers at the large Kroger store being constructed just a block away from Vanguard-Sentinel Careeer & Technology Centers in Fremont. After addressing 32 students in the Vanguard cafeteria last Thursday, the students followed Monak to the construction site, where a handful of ironworkers from Black Swamp steel erectors were waiting to talk about their career choice.

“If you choose the trades, and work hard, your apprenticeship will be your four-year colt degree,” said Monak. “And you’ll be making money all the while. You won’t be graduating from college with an unmanageable student debt load.”

The students intently listened to success stories, like that of Earnie Dickens of Black Swamp steel erectors, one of six steelworkers who created the framework of the 9,300-square-foot Kroger store in just 16 days.

“Taking courses in the trades at Vanguard is a huge way to get started,” Dickens told the students. “Remember that the more you know, the more you’re employable. Learn all you can. You’ll be paid during your apprenticeship, and you can work your way up to $54 an hour, like I’m paid.”

Dickens said he has an expensive house on a golf course in Oregon, Ohio, and expects to retire at 56. His son, also a steelworker, is 22, owns his own home and supports a wife and two children.

“There are so many pathways that students can take at Vanguard,” said Director Dave Buening. “We do a fantastic job of getting our students prepared for a career by the time they leave Vanguard.”

Kids often don’t realize there are viable options other than college, where they often pile up a lot of debt – and with little chance to pay off the student loans,” said Jon Detwiler, Supterintendent of Fremont City Schools. “Some have ended up with $85,000 or more in student debt, and a career that only pays about $30,000 a year.

“So many places in business and industry train you, much like the ironworkers. When you begin you get paid and trained at the same time. Going to a trade school and working in the trades once had a bit of a stigma. That’s no longer the case.”

Monak pointed out that while many struggle to find a good job with a good salary, right now there is a need for tradesmen such as welders and ironworkers around Northwest Ohio.

“You’re blessed to be in this area, because there’s a lot of work to be had,” said Monak. “We go from one construction job to the next, with very little down time. There are a lot of opportunities, but you’ve got to be serious about doing the work to learn a trade.” 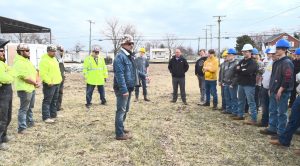 CUTLINE: Rob Monak of Ironworkers Local 55 brought union tradesmen together with students from Vanguard-Sentinel Careeer & Technology Centers in Fremont to learn the benefits of learning a trade and pursuing a successful career. (Photo by D’Arcy Egan)