It’s a new day, as summer crowds flock to area

The sandy Lake Erie beach in downtown Port Clinton has been drawing crowds of sunbathers, with dozens of boats rafting along the beach. (Photo by D’Arcy Patrick Egan)

Touring the Port Clinton area over the recent Independence Day holiday, record-setting numbers of visitors and local residents were out to have fun. From a bustling Lake Erie and its beaches to Port Clinton’s new downtown area music scene, Vacationland has been in full swing.

The ferries to Put-in-Bay, Middle Bass Island and Kelleys Island have been busy, too, as the pandemic has wound down around Ottawa County.

A groundswell of retail businesses have had ribbon cuttings to mark their openings in recent weeks. The simple pleasure of sitting on the sand at Waterworks Park has lured many to the beaches, including rafts of boaters anchored in the shallows.

Governor’s Fish Ohio Day brought journalists and state and local legislators to Port Clinton for the festivities, ready to enjoy a morning of Lake Erie walleye fishing. They were not disappointed, with a record-setting population of Ohio’s favorite fish eager to bite. 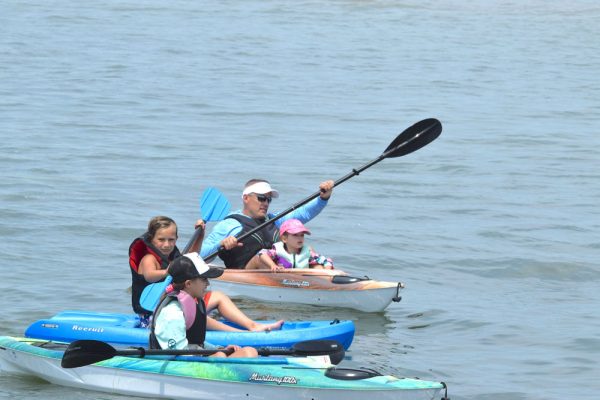 Water Trails have helped to attract kayakers in both East Harbor and West Harbor, and around the Lake Erie Islands. The Portage River, which greets Lake Erie in downtown Port Clinton, will soon be designated as a Water Trail.

“Developments over the last couple of years have really made Port Clinton a destination, not just a parking lot for people eager to enjoy the island lifestyle by going to Put-in-Bay and the Lake Erie Islands,” said Port Clinton Mayor Mike Snider. “There so so many more things to do on the mainland now than ever before.”

At a ribbon cutting for the new Off The Rock entertainment venue at Commodore Perry Inn on Lakeshore Drive on Friday, Snider pointed out he’d been on hand for 14 ribbon cuttings for new Port Clinton businesses just this summer.

“I don’t know of any mayor who’s done that many ribbon cuttings in such a short time,” said Snider, with a big smile. Almost 20 downtown businesses have popped up or been renovated over the last year.

Balmy weather brought out the crowds for the Independence Day weekend in Port Clinton. Featured were fireworks, a 5K walk/race, family dance party, benefit duck race, a custom car show and music all around town. 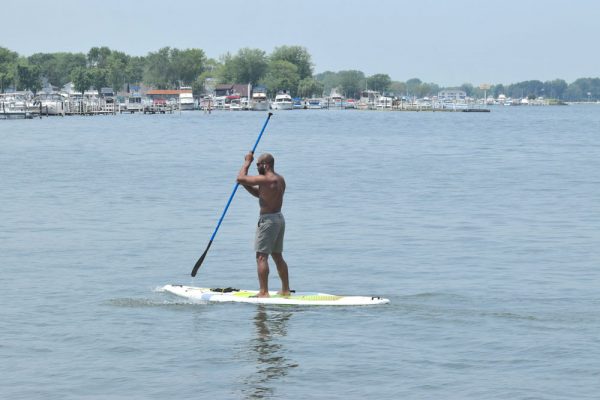 The number of anglers and other paddlers who cruise local waters on paddle boards and in kayaks have exploded in recent years. (Photo by D’Arcy Patrick Egan)

The East Harbor State Park campground was crowded, as so have been private campgrounds all around the area. Motels, restaurants and tourist attractions have been busy. Hundreds of Lake Erie charter boats filled with anglers leaving the docks every morning wanting a taste of the country’s best walleye fishing.

East Harbor’s launches and marinas sport watercraft ranging from kayaks and paddle boards to jet skis, fishing boats and luxury yachts. Boaters clog the East Harbor Channel on weekends to go boating on the big waters of Lake Erie to cruise, fish or watch the Fourth of July fireworks.

Port Clinton officials have focused on renovating the downtown area, where the main drag has been closed to accommodate the Music on Madison Street Entertainment Stage, a LiveNation stage with bands playing almost nightly through September.

“We’ll continue to focus on the downtown area, which is the heartbeat of our community,” said Snider. “We had to start somewhere, and that’s the economic engine that gets things going to make this a great place to live and work.”

Home to a flotilla of boats in summer, East Harbor on the Marblehead Peninsula has seen a large amount of boating traffic this summer, especially during weekends in the busy East Harbor Chanel heading to Lake Erie.

The area has also developed strong wireless Wifi hubs to allow people who live, work and visit here to reach out and connect around the world, said Snider.

Ottawa County Commissioners are working with the Ohio Department of Transportation to gain approval for a $10 million expansion of the Route 53 Corridor, a bottleneck at times on one of the main routes into and out of Vacationland.

“People are coming here to work and live because of our lifestyle,” said Snider, pointing out that the area is only 20 minutes from the Sandusky malls and amusement parks, and an hour away from major league sports in Cleveland.