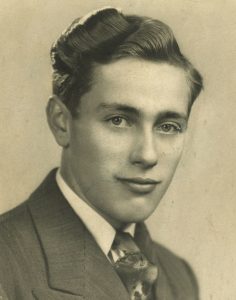 Jack ‘Jake’ T. Ferdinandsen, 97, of Catawba Island, passed away quietly Sunday morning, Nov. 29, at the Ohio Veteran’s Home in Sandusky, where he was a resident.

Jack was born in Sandusky in July of 1923. In his early years, he lived most of his life in Ohio, where he was one of eight children. His family survived the Great Depression and when three cousins lost their lives in the attack on Pearl Harbor, Jake left school to enlist in the United States Army’s Fifth Air Force. He trained as an aerial and waist gunner because, as he used to say, he was the only one small enough to fit in the ball turret of a B25. He was stationed in Port Moresby, Papua, New Guinea, and fought with his platoon throughout the Pacific Theater including several aerial missions over Japan. In 1943, his plane was shot down and crashed near the Australian border. Even though he was wounded, Jack saved the lives of three fellow soldiers by freeing them from the wreckage. He was awarded the Purple Heart for his actions. As the war continued, Jack eventually transferred to the Signal Air Warning Patrol and eventually he trained in the fire sector as a surveillance operator, a radar technician, and he even was reprocessed as the company’s cook. When asked why he left front line combat duty to become the chef, he would chuckle and say that their regular company’s cook was killed in an attack and since no one else even knew how to peel a potato, he volunteered so he and everyone else in the company wouldn’t starve. He was honorably discharged in 1945 after the passing of his father and he had to return to the States to help with his siblings. In addition to the Purple Heart, he was awarded the Bronze Star, Good Conduct Medal, Pacific Theater Medal, and an award for his role in the Liberation of the Philippines.

In 1948, Jack married the love of his life, Mary (Smith) and together they raised two children in a home he built by hand from the ground up out in the country at the edge of what is now known as Perkins Township. Jack was a masonry worker and tradesman with New Departure, retiring in 1991 after 41 years of loyal service. He also was a skilled for-hire handy man, and he built many a fireplace, poured numerous driveways, tiled residential and commercial walls, and refurbished too many local structures to count. He was a member of Holy Angels Church in Sandusky, American Legion Post 83, and Amvets Post 17.

After retirement, Jack sold his home and moved to Catawba Island, where he and Mary lived with his son, Michael, and daughter-in-law, Karen, since 1999. Jack was honored with his high school diploma with the graduating class of 2002 of Port Clinton High School as he had left school early to join the Army. After the death of his wife in 2006, Jake was able to travel with his son, even flying in a commercial plane for the first time since the war, seeing Las Vegas, Atlantic City, and Lake Mead. He also enjoyed spending time with his granddaughter and great grandchildren, who loved to take him out on adventures. He loved to gamble, play the lottery, Keno, poker, and he even enjoyed just a friendly nickel-and-dime game of cards with his family and friends. He was a die-hard Cleveland Indians and Browns fan. Jake never asked for anything and genuinely appreciated everything that came his way. Often jokingly referred to as the ‘Energizer Bunny’ by those who knew him, Jake never let aging or disappointment deter him, get him down, slow him down, or put a stop to his faith in the promise of a new day. Jake remained a social butterfly even when his health started to fail and he took up residence at the Ohio Veteran’s Home for the past two years. He loved to share war stories with the other veterans and all those who came to visit or even anyone who would just like to sit and listen.

Jack is survived by his son, Michael, and daughter-in-law, Karen Ferdinandsen, of Catawba Island; his sister, Patricia DuBois of Sandusky; son-in-law, Greg Koch of Huron; granddaughters, Amy (Tom) Harrington of Sunbury and Heidi Koch of Philadelphia; grandson, Rob (Amy) Koch, of Columbus; great-grandchildren, Ashley and Will Harrington and Garrett and Kaden Koch, and numerous nieces, nephews, cousins and untold friends from Slater’s Madison Street Pub in Port Clinton as well as Manny’s Sports Tavern and Grill and Cheers Sports Bar & Grill both in Sandusky, where he spent many afternoons reminiscing over a cold Bud Light and a game of Keno.

Jack was preceded in death by his wife, Mary, on Christmas Day in 2006, his daughter, Jacqueline (Koch) in March of 2007, his parents, Olaf and Marjorie (Muffert) Ferdinandsen, brothers, Robert, Frederick, and Harry, and sisters, Corrinne (Ruthsatz), Betty (Cardella), and Shirley (Smith) as well as many cousins and other relatives.

Condolences may be shared online at www.grofffuneralhomes.com.