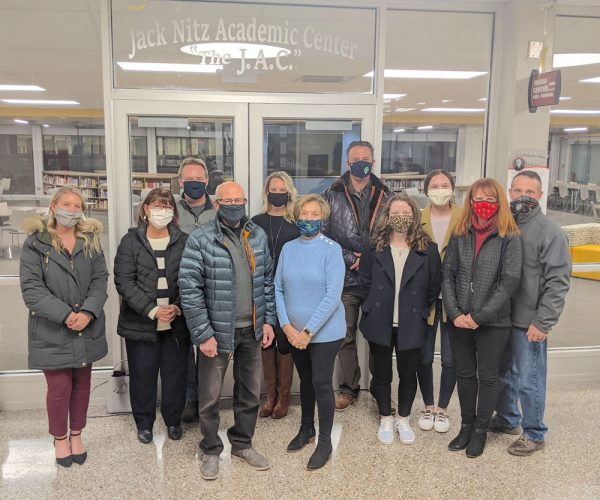 In a surprise ceremony last Thursday, Jan. 21, a small group of school officials and Nitz’s family surprised him with the naming of the new facility after the popular school official. 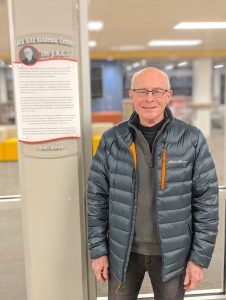 Jack Nitz retired after a stellar 40-year career in the Port Clinton School District, prompting the Port Clinton Board of Education to honor him by naming the present school media center as the Jack Nitz Media Center, or The J.A.C.”

A bold plaque outside of the center now reads “Ask Jack!”

That phrase had become embedded in many of the conversations that have taken place at Port Clinton schools over the years. Nitz has been a steadfast leader in the Port Clinton School District for the past four decades.

Always willing to help in any way he could, Jack continued his work after retiring as high school principal in 1997 by serving the district as Director of Student Services until 2020. His dedication to educational leadership is known throughout the region and by generations of students and staff who walked the halls at Port Clinton.

The center stands as a commitment to students, learning, and excellence for which Nitz has dedicated his life, said officials. The Jack Nitz Academic Center, they pointed out, should inspire all who enter, and above all instill a new sense of belief and pride in the ability of Port Clinton students to improve academically and shape the world.

“True to Jack’s style, he wanted to quietly retire in June. After four decades, we couldn’t let that happen,” said Patrick Adkins, Superintendent of Schools. “He has been such a committed member of our team, respected educator, voice of reason, mentor and friend.

“He is Port Clinton City Schools, and it is only fitting this exceptional center of Port Clinton High School be named in his honor,”

For pictures and a video of the presentation, visit www.pccsd.net or facebook.com/portclintonschools.