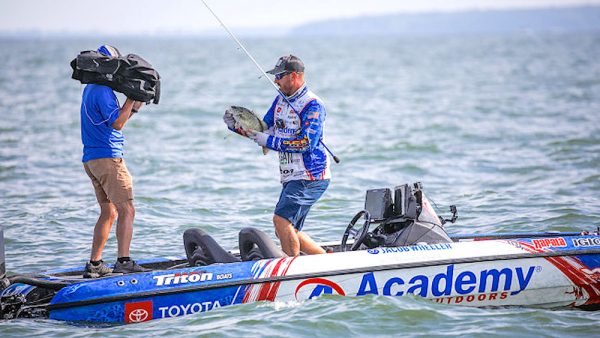 Bay’s Edge had the pleasure of having Jacob Wheeler stay with us this past week. He was fishing in the FLW tournament out of Sandusky. Wheeler is considered one of the top four tournament bass fishermen in the world. He has won upwards of a million dollars so far in his career. We got to talk to him a couple nights and it was interesting to learn about his lifestyle.

There will be many more tournaments being held on Lake Erie, which means more tourism dollars for the Port Clinton and Sandusky areas. When we were talking with Wheeler, he raved about the great bass fishing on Lake Erie and said many people were coming to the area because of how good the bass fishing is right now.

We also had the privilege of filming with the Midwest Outdoors television show. It is a nationally-televised show that will give the Port Clinton area great exposure.

Now on to the fishing report! The walleye fishing has slowed to where pretty much only trolling fishermen have been finding success. The best area has been the dumping grounds north of Cedar Point. Crankbaits set 100 to 110 feet back with two-ounce weights have been working the best for anglers.

I hate to say it but we need a good blow day on the lake and cooler temps to get these fish fired back up again.

The yellow perch bite has been erratic with everyone catching the perch, but some only getting a few while others have been getting limit catches. D-Can, Rattlesnake Island and north of North Bass Island on the Canadian line have been the best spots to go.

The catfish bite has remained strong and we have been getting more reports of the Dempsey Access area producing more catches. This is a public ramp in Marblehead.

In closing this week’s report, I just want to say that cooler temps and the lake turning over will get all the species biting again. So until next week, catch some fish, be safe, have fun and keep a tight line.