Jake, Emily Dunfee of Marblehead named Business of the Year 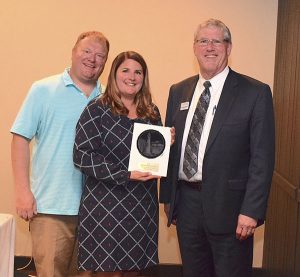 Jake and Emily Dunfee of Schrock’s Marina, Rescue Marine and the Hidden Beach Bar in the Village of Marblehead were given the Business of the Year Award by the Marblehead Peninsula Chamber of Commerce at the 82nd annual Awards Banquet on Thursday night. (Photos by D’Arcy Egan)

Jake Dunfee grew up in the area and worked as a deck hand and boat captain before he and his wife, Emily, bought Shrock’s Marina and the Boater’s Emergency Service, which rescues boaters in peril on Lake Erie. In recent years, the couple has created Hidden Beach Bar at Schrock’s Marina, which has become a summer social mainstay on the peninsula. 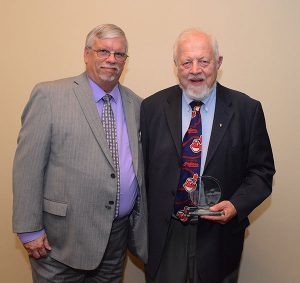 “It’s been a lot of hard work, but we love living here and enjoy all of our dockers, neighbors and employees,” said Jake Dunfee, accepting the special award created by Crystal Tradition of Tiffin from Chamber President Jim Deer.

“It’s been a slow and steady growth for the Hidden Beach Bar,” said Emily Dunfee, “but we’ve developed a lot of great menu items and have a wonderful summer following because of the food we serve and the popular bands we feature.” 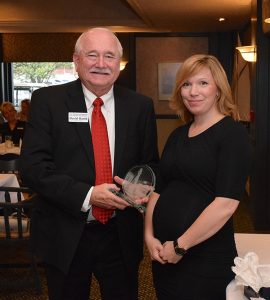 David Barth of Baypoint Resort & Marina was awarded the Past President of the year Award by Executive Director Kate Messa of the Marblehead Peninsula Chamber of Commerce.

Long-time volunteer Thomas Henderson, of Lakeside, was given a trophy by Crystal Tradition for winning the 42nd annual D.S. Kirkpatrick Award by Marblehead Bank President William Tuttamore for Hendserson’s many years of service to the chamber, the Village of Marblehead and Lakeside Chautauqua.

A popular Santa and civic leader over the years, Henderson was a perfect fit for the Kirkpatrick Award, established in 1979 to honor the dedication and unselfish devotion to the principles of service to the community through the Chamber of Commerce.