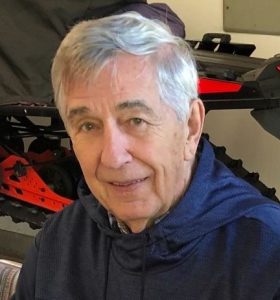 James B. Gresh, 80, of Lakeside-Marblehead, passed away peacefully at home, with his family at his side. He was born in Marblehead on Sept. 13, 1942, to John and Pauline (Glovinsky) Gresh, the eighth of ten children. He graduated from Danbury High School in 1961 then went on to proudly serve in the United States Navy serving in Casa Blanca, Morocco, and then onboard the aircraft carrier, USS Lake Champlain. After his discharge he married Ruth A. (Magrum) at St. Joseph Catholic Church in Marblehead on June 18, 1966.

James worked for the Fenner Dunlop company for 40 years until his retirement. Being raised by Lake Erie for his entire life, he loved fishing and boating. James always treasured hosting family and friends for his famous fish fries, it was a fun time for everyone.

A Memorial Funeral Mass was celebrated on Tuesday, Oct. 11, at St. Joseph Catholic Church, 822 Barclay St., Marblehead. Visitation was held before Mass in the church. In lieu of flowers, the family suggests memorial contributions be directed to Stein Hospice, 1200 Sycamore Line, Sandusky, Ohio 44870. The Gerner-Wolf-Walker Funeral Home & Crematory of Port Clinton is assisting with arrangements. Online condolences may be shared at www.walkerfuneralhomes.com.