‘James’ ready to burn on Port Clinton beach! Legendary summer of fun is on the horizon 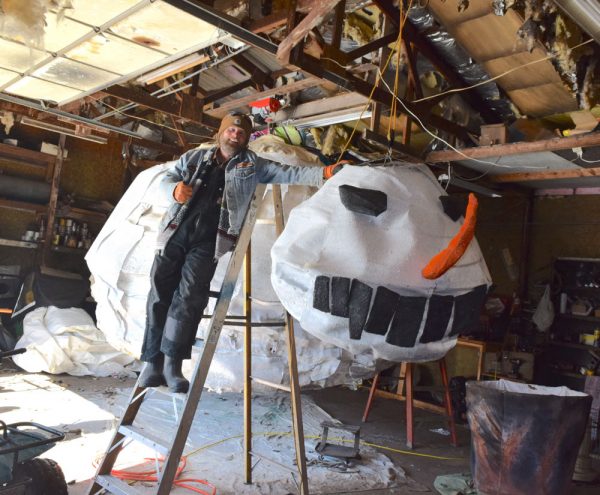 Lenny Kromer of Castalia puts finishing touches on “James,” this year’s Burning Snowman, the name a tribute to the late videographer Nick James of Nick James Productions. The big guy will hopefully chase away the winter weather and lure the fun crowd back to Port Clinton. (Photo by D’Arcy Patrick Egan)

While the Walleye Drop is the official end of the vibrant summer season that has been created in the City of Port Clinton, local folks and an army of visitors won’t have to wait much longer to kick off the festivities in 2022.

With the Burning Snowman returning for its sixth appearance on the Lake Erie shoreline on Saturday, Feb. 26 at dusk, a crowd of bands, bars and shuttle buses will be ready.

So will “James,” this year’s impressive snowman, created by Lenny Kromer of Castalia, Matt Williams of Catawba Island and Mike Roder, the popular owner of the Catawba Island Brewing Company in Port Clinton.

“It took a few 40-hour work weeks to get the job done, but ‘James’ is in great shape,” said Kromer last weekend. “We name the Snowman every year, to give him a lot of character, and this year we wanted to remember the late Nick James, our good friend who unexpectedly died last summer.”

The flamboyant James was the talented creator and producer of PIB tv.com and Nick James productions.com, whose videos captured the flavor of Port Clinton and the Lake Erie Islands. His videos of the Walleye Drop and Burning Snowman were extremely popular around the region and the country, helping the local tourism industry to transition from summer extravaganzas to winter fun.

Kromer, who works at the Rockwell Springs Trout Club, has been diligently keeping an eye on the weather. Cold temperatures are always expected on the last Saturday of February, when the Snowman traditionally burns to chase away the gloom of winter.

“Wind is our enemy,” said Kromer. “We have the full support of the Port Clinton Fire Department to be ready to extinguish the blaze, should that be necessary.”

The Burning Snowman Festival at Dock’s Beach House on West Lakeshore Drive on Saturday will have music from 3-10 p.m. On Saturday, free shuttle buses will ferry folks to various bars and taverns around the area.

The festival will expand this year to include The Family Freeze on Friday from 4-7 p.m. at Mr. Ed’s Bar & Grill and the Commodore Perry Inn, which also included music, and the GOP Chili Cook-Off. Friday night features “Tap Takeover” at the bars in downtown Port Clinton.

“The Burning Snowman is a neat event, very creative,” said Port Clinton Mayor Mike Snider. “It draws some life into Port Clinton at a time when it’s pretty dark around here in winter. It’s about getting rid of the snow and think ing about summer. The downtown merchants are just as anxious as us to get the summer season started.”

Snider believes that each festival builds up to the next one, from the Walleye Drop to Burning Snowman to the Walleye Festival on May 26-30, followed by all of the summer events. He expects crowds all summer long to hear the popular schedule of bands at the Music on Madison (MOM) outdoor stage on Madison Street.

“We’ll have the MOM stage up and the tables waiting on Madison Street on May 15, and nightly bands will begin on May 27,” said Snider. “To give you an idea how much our MORA (open carry) rules have impacted downtown, when Port Clinton City Council passed the MORA rules we hoped to sell 20,000 MORA cups each summer in the downtown bars and restaurants.