Jane Spriestersbach named to be curator of Catawba Museum on Oct. 1 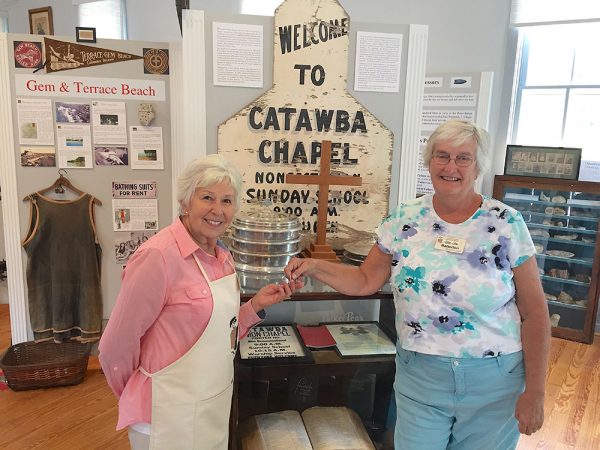 Jane Spriestersbach has been selected to become Curator of the Catawba Museum at Union Chapel when the current Curator Connie Batterton retires at the end of September. Spriestersbach was born and raised in Huron, Ohio. She and her husband, John, have been full-time residents of Catawba Island for over 25 years.
After obtaining a degree in Applied Science from Toledo’s Owens College, Spriestersbach presented her Licensed Radiographer credentials to Magruder Hospital in Port Clinton, where she worked until retiring as Chief Technologist of the Mammography Department in 2012. Since then, she has pursued a number of personal and philanthropic interests, including serving as a Docent at the Union Chapel Museum since it opened in 2018.

“I took an early interest in history,” noted Spriesterbach, “perhaps inspired by the fact that an old building on Huron’s Main Street still bears the name of an early 20th century grocery store once operated by my grandfather. The iconic buildings of Catawba Island fascinate me in the same way. Every one of them undoubtedly has a story to be told.”

The Historical Society’s search for a new Union Chapel Museum curator began several months ago when Connie Batterton advised that she and her husband, Pete, would start spending more of each winter in Florida. Even though the Museum is closed from mid-October to mid-May, planning for the 2020 operating season will begin in November 2019. Thus, the Historical Society Board of Trustees placed a high value on candidates like Spriestersbach who are year-round residents of Catawba Island.

“We were also seeking someone who really understands how Lake Erie is such an integral part of what makes Catawba unique,” said President Craig Koerpel of the Historical Society’s Board of Trustees. “Of the several men and women we spoke with about the curator position, Jane had the most passion and innate feeling for the experiences one could call ‘Lake Life.’ We believe she can represent the Museum in a manner perfectly in tune with our mission to preserve and protect Catawba’s heritage. ”

As curator, Spriestersbach will be responsible for maintaining the collections and administering the daily functions of the Museum. She will recruit, train and schedule volunteers, supervise administrative personnel, and generally interface with the public.

“Many of the Museum administrative duties are similar to those I was responsible for at Magruder,” Spriestersbach observed. “My Museum-specific tasks will all be new. Fortunately, I know I will receive some excellent instruction from Connie before she heads south, and she assures me she will be only a phone call away when I bump into something that is initially outside my comfort zone.”

Union Chapel was built in 1888 to serve as a non-denominational Sunday school for area children. Dwindling attendance ultimately led to its closure. To preserve the iconic structure, ownership was transferred to Catawba Island Township in the 1990’s. The Township leased the building to the Historical Society for use as a community museum and cultural center which opened last year.

There is no charge to visit Catawba Union Chapel Museum. Operating cost is principally underwritten by dues to the Historical Society. Annual and lifetime memberships are available. For more information about becoming a member, or about group tours of the museum, please call 419-967-5363 or email info@catawbaislandhistoricalsociety.com. The Catawba Island Historical Society also has a webpage which is www.catawbaislandhistoricalsociety.com