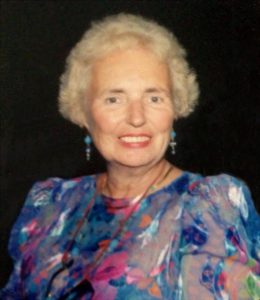 Janet Spencer passed peacefully in her sleep at her home in North Ft. Myers, Florida, on Saturday, Jan. 4.

She was preceded in death by husband, Robert Spencer in 2013, and her sister & brother-in-law, Margaret (Peg) & Roy McClellan.

Janet graduated Alliance High School in 1944 and then earned her teaching degree from Mount Union College during World War II. She was an active member of the Tri Delta sorority her entire life. She earned her Master’s in Education during the late 1970’s from Kent State University. Janet taught high school for 30 years at Marlington (Alliance, Ohio).

She married Robert Stewart Spencer of Alliance, Ohio on June, 12, 1948 and they celebrated their 65th wedding anniversary just before Robert passed in 2013.

Janet was well known for her lifetime passion for boating and also authored several magazine articles in 1977 in Lakeland Boating, journaling everyday life on a boat with a family traveling the waterways between the Great Lakes and Florida. Their youngest child had just turned eight years old. She was often known to work in stories of their boating trips into her English lectures. She was editor of the Marlington Yearbook for many years. She was also active in the Alliance Women’s Club, the Gravel Bar Yacht Club, the Put-in-Bay Yacht Club, the Lakeside Women’s Club, the Lakeside Methodist Church, and Christ United Methodist Church (Alliance). Janet and her husband Robert were also very active in the United States Power Squadrons Sail and Power Boating. For those who knew Janet, she was also an ardent bridge player and continued to play regularly until just before her death. Janet enjoyed world travel and visited (and sometimes led trips) to nearly every country in Europe; as well as Egypt, China, Thailand, the Caribbean, and Hawaii. Janet was an avid reader and in her retirement, she was a regular volunteer at the Lakeside Methodist Church library. Janet and her husband Robert were also charter members of the Crews Nest private boating club which was established on South Bass Island in 1970. Janet (with many friends and family), explored the Great Lakes and boated the Intercoastal Waterway from Lakeside, Ohio, through the Erie Barge Canal, down the Atlantic, and across Florida to the Gulf of Mexico six times. Janet’s and her husband’s passion for boating began with a trip on the Intercoastal Waterway in the late fifties with fellow boating friends from Alliance, Ohio.

A celebration service of Janet’s life will be held at Untied Lakeside Methodist Church, Lakeside, Marblehead later this spring.