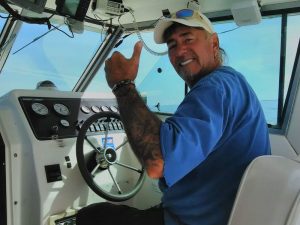 Jeff Helline, 64, of Marblehead, passed away peacefully on Jan. 15 after a long and courageous battle with cancer. He was born on Dec. 28, 1958, to the late Walter Sr. and Irene (Balala) Helline.

Jeff fulfilled his dream of becoming a captain on Lake Erie! As a charter captain for Double D Guide Service in Port Clinton, he spent many hours fishing during the summers. He had a tremendous reputation and was very sought after as a captain. He also enjoyed ocean fishing; one of his highlights was catching a Mahi-Mahi. He loved that ugly fish! Jeff was a fun-loving guy that anyone and everyone enjoyed being around. When he wasn’t fishing, he enjoyed playing Euchre & 500 bid with his family. He loved to win! He also loved sports; his favorites include Ohio State, Cleveland Browns and Cleveland Indians. But most of all, he loved his wife, children and grandchildren. He will be missed dearly by everyone that knew him.

Condolences may be shared online at www.grofffuneralhomes.com.