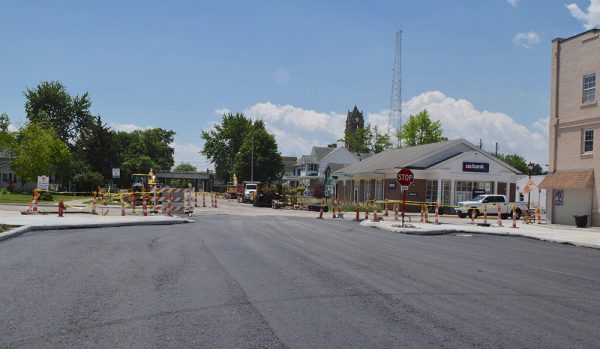 Having finished the base and intermediate coats of asphalt on the 100 block of Jefferson Street in downtown Port Clinton, crews are now working hard on the 200 block. There is a lot yet to be done, but the project should be completed in August. (Photo by D’Arcy Egan)

The 100 block of Jefferson Street in downtown Port Clinton now has a new base and intermediate coats of asphalt, and this week the 200 block is the focus of the major $2.8 million renovation of the roadway. There’s still much to be done, and Safety-Service Director Tracy Colston reports the project should be completed in August.

As well as needing major infrastructure work under the busy street, local officials are hoping Jefferson Street’s new look from West Third to Perry Street will help with city water and sewer problems. Hopefully, it will also brighten the thoroughfare as much as the Madison Street and Second Street renovations did just to the west.

“We’re pretty much on schedule, despite a rainout or two that required some weekend work,” said Colston. “We’re satisfied with the work being done. We still have a pump station to install on North Jefferson Street (north of Perry Street), as well.”

The 100 block has its base and intermediate coats of asphalt, and the same are now being applied to the 200 block. When that is done, both blocks will get a finish coat at the same time.

The curbs and sewers have been rearranged in the two block stretch of Jefferson Street, as they were on Madison Street, providing a new look to the street and quality parking. A busy city street, the completion of Jefferson will hopefully bring new retail development to the area.

The pump station to be constructed on North Jefferson Street will not alleviate the present flooding there, said Colston, but a planned walkway along the Portage River could mitigate the parking lot flooding there.

The Ohio Department of Transportation has already awarded $1.9 million for the waterfront walkway project along Port Clinton’s downtown and the Portage River.

ODOT provided a $2.5 million Small Cities grant for the project. Some funding will also be provided by ODOT’s Transportation Alternative program and the Ohio Public Works Commission.