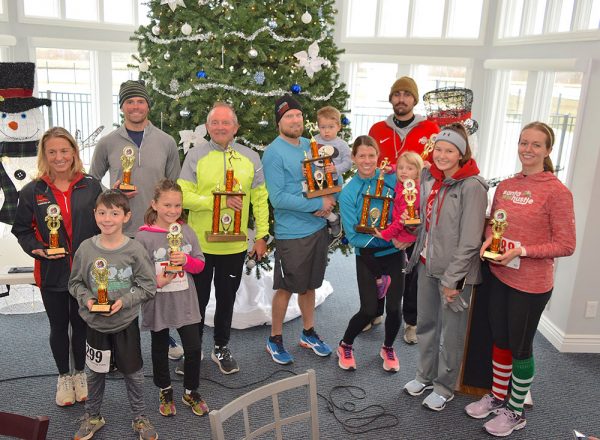 It was a family celebration at the 10th annual Jessie Schenk Memorial Turkey Chase 5K Run/Walk on Saturday. Jen and Sean Mooney have been competing in the event every year, and this year they took home the biggest trophies for finishing as the top male and female runners. The Mooneys are ones with the biggest trophies, and have their kids, McKenna, 4, and Liam, 2, in their arms. (Photos by D’Arcy Egan)

Sean Mooney grew up on Catawba Island and even though he and his wife, Jen, now live in Peninsula, Ohio, competing in the annual Jessie Schenk Memorial Turkey Chase 5K Run/Walk brings them back each year.

“We look forward to competing every year with our old friends from this area,” said Sean Mooney, whose parents, Kevin and Sue Mooney, still live on Catawba Island. “It’s a great event. Jen and I love to compete in marathons together — we’ve run in 26 of them over the years — and this race is near and dear to our hearts.”

This year’s Turkey Chase will be the last, said hosts Mike and Ginger Schenk, as they shed a few tears for their daughter, Jessie, who died in 2009 while in college. She was an exceptional student and athlete who loved to run, swim and play tennis. To honor her memory, they created the Turkey Chase to award scholarships to other scholar/athletes at Port Clinton High School.

In the last decade the event has raised more than $47,000 and awarded 30 scholarships. Many of the recipients were guests for this year’s race and a late morning brunch.

While the race has run its course, its success has meant the scholarship fund is able to continue to award the annual scholarships, said Ginger Schenk. While the memorial fund they created had been designed to go on forever, it was given its biggest annual boost on Saturday with an estimated $10,000 in sponsor and race entry fees. 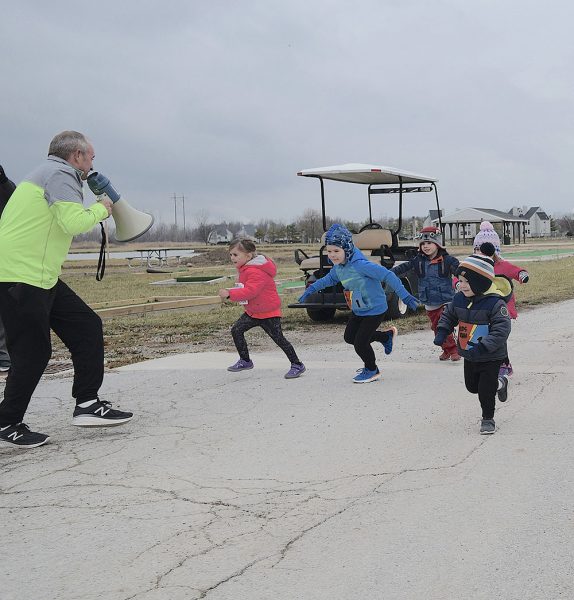 Mike Schenk launches the Trot for Tots at at the Jessie Schenk Memorial Turkey Chase at the The Resort at Erie Landing.