Jet Express spotlights beginning of summer season Put an island in your life! 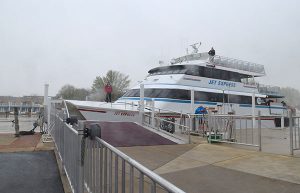 The Jet Express pulls up to its Port Clinton headquarters on the Portage River to make its first run of the season to Put-in-Bay.

The Jet Express slammed the door on a chilly spring this week, sending its first ferry of the summer season to Put-in-Bay with a gaggle of media folks and area politicians. Some of the shops and restaurants were just waking up, but Island Ambassador Peter Huston said that won’t last.

“Everyone’s anxious to get the summer season started,” said Huston, who dispenses a wealth of island information, including the popular Foodie Trail list that made its debut a year ago, at the Put-in-Bay Visitors & Convention Bureau. “We’ve got a lot of experiences for visitors, from family-friendly features and events to weekend getaways.” 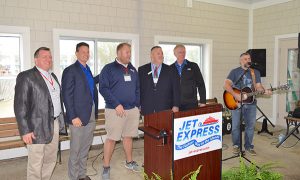 Featured speakers at Media Day hosted by the Jet Express were Brad Ohlemacher of the Put-in-Bay Chamber of commerce, Director Matt McLaren of TourismOhio, General Manager Kelly Freimark of the Jet Express, Mayor Mike Snider of Port Clinton and President Larry Fletcher of Lake Erie Shores and Islands, all being serenaded by singer Pat Shepard.

Huston was at the helm of the Put-in-Bay Tour Train, and his first stop was the renovated Perry’s International Peace Memorial, on this morning a fog-shrouded experience. On a sunny day, you can see Canada’s Pelee Island a few miles away.

Some of the Put-in-Bay sights are more than a century old, including the 352-foot Perry’s International Peace Memorial completed in 1915. The elevator to the top was once steam powered and took about 10 minutes to go to the top. Since its renovation last year it now runs as smooth as silk.

The Tour Train stopped next at Perry’s Cave, where the Butterfly House and its gift shop received the most attention.

One of the reasons for the success of the Foodie Trail, which rewards visitors who stop at a variety of the bars and restaurants in town, has been the amazing upgrade of dining experiences in recent years. From the lobster bisque at The Boardwalk to the walleye bites and potato pancakes at Fishbowl and Mossbacks, just across the street, lunch was a delight. 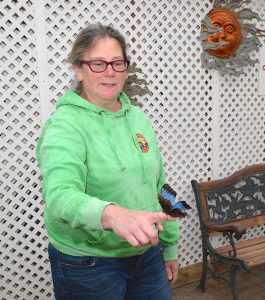 Butterflies are hatching at the Butterfly House at Put-in-Bay, part of the Perry’s Cave entertainment commplex. Owner Diane Duggan gives a bright-colors butterfly a ride on her finger. (Photo by D’Arcy Egan)

When all of the famous pubs swing back into action with a mind-bending array of bands, Put-in-Bay will rock all summer long.