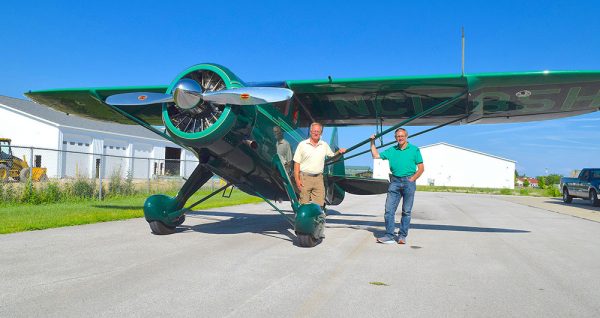 A pair of brothers from Marblehead, Jim and Ken Kreutzfeld, have been airplane pilots since their high school days. The last few decades they have focused on restoring eclectic Howard airplanes from the 1940s, and at the huge EAA AirVenture Oshkosh 2019, the 68th annual EAA fly-in convention known as the “World’s Greatest Aviation Celebration,” they reached the pinnacle of success.

Their 1943 Howard DGA-15P airplane, a beautiful green aircraft that calls a hanger at Liberty Aviation Museum its home, was judged to be Grand Champion from a category that included 939 vintage airplanes.

“The Oshkosh Air Show is the largest in the world,” said Jim Kreutzfeld. “It is enormous, with more the 642,000 people attending the week-long show.”

More than 8,700 local Oshkosh residents attended, about 13% of the city’s population, and 10,000 aircraft flew in to Wittman Regional Airport for the show, as well as other airports in east-central Wisconsin. There were 16,807 aircraft operations in the 11-day period from July 19-29, an average of 127 takeoffs and landings per hour.

“We had an inkling we were going to do well at the show,” said Jim Kreutzfeld. The brothers had talked other member of the Howard Airplane Club, and discovered officials had decided to hold off the judging “until the green airplane showed up.”

The Kreutzfeld brothers were a late arrival because of flooded fields at Wittman Airport, but theirs was “the green plane” being mentioned all around, a Howard that was in pristine condition and glistening from many, many coats of primer, paint and clear coat.
In the first five hours after the brothers had arrived at the show, all of attention to their airplane had given them a feeling something great was about to happen.

After a reporter from EAA Vintage Magazine pressed the brothers for an interview, as did the CBS Sports Network, and they were ordered to report to the airport control tower the next morning for an aerial photo shoot, they knew their airplane had turned heads.

Each airplane had to be judged on a scorecard attached to its propellor, the brothers explained. There were three boxes to be checked to move an airplane along in the judge’s standings. Their Howard airplane had all the checks, and a couple of extra ones from the judges.

“Our Howard got a lot of attention,” said Jim Kreutzfeld. “At one point, seven judges were walking around our airplane.”

On Saturday night at the awards ceremony, the Kreutzfeld brothers’ Howard airplane was embraced as the Grand Champion, an honor Jim Kreutzfeld said was “a lot of fun, and magical in a sense.”

Their love of flying and airplanes began early, when Ken Kreutzfeld bought a $2,400 two-seat Luscombe with a 55-horsepower engine while in high school. It was a very cool and inexpensive way get around for the brothers.

Ken Kreutzfeld became an airplane mechanic, while Jim Kreutzfeld went to work as a geologist in the oil and gas drilling business. They never lost their passion for flying, or restoring great old airplanes. Ken Kreutzfeld began by restoring a Beechcraft Staggerwing, followed by a Grumman Duck, an amphibian airplane, which were more than 70 years old.

The brothers were especially fond of restoring Howard airplanes, and for a good reason, they said.

“The Howard airplanes from the 1940s are fun to fly, a real hoot,” said Jim Kreutzfeld. “It is a great flying airplane and very stable in the air. The larger Howard airplanes of that era were flown in the popular airplane races of the time. The slightly smaller versions, like the one we have, are able to cruise at 175 miles per hour. For the 1940s, that’s a pretty fast airplane.”

Jim Kreutzfeld and his wife, Roberta, spend part of the year in Castle Rock, Col., where he flies his Cirrus and King Air airplanes on business all year round, visiting well sites and ferrying experts to drilling locations.

“It’s so convenient,” said Jim Kreutzfeld. “It shortens a lot of inspections from three days to just one. My wife, Roberta, disdains commercial aviation and airports after enjoying the luxury of general aviation. No lost luggage, TSA or airport shenanigans.”

But his biggest thrill of flying was landing at this year’s Oskosh Air Show.

“The green Howard really turned heads. That made all of the hard work Ken and I did with the restoration worth it,” he said.