JJ’s Table and Bar features flavors of the Yucatan 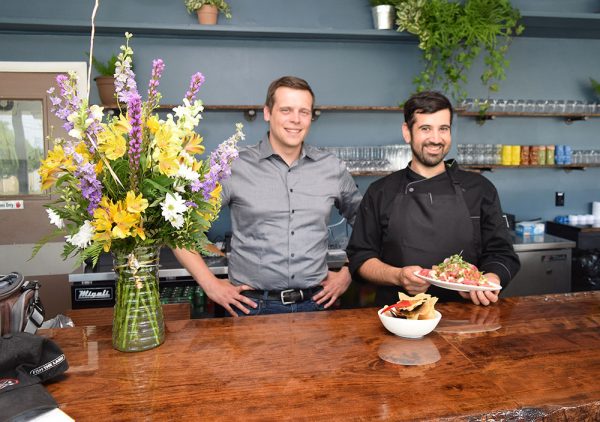 Diversity is a keynote of JJ’s Table and Bar, which opened recently on the Marblehead Peninsula, with exceedingly fresh local ingredients and the spirit of the Yucatan Peninsula of Mexico.

The restaurant was created by partners Julian Helsper and Jorge Huerta, a pair of college buddies at Purdue University who landed in the area a few years ago. Helsper is the business guy, Huerta is the chef, and their new restaurant is a treasure of flavors and fine dining.

As an outdoors guy who has enjoying bird hunting and fishing in the Yucatan, when contemplating a meal in the back country it’s usually a given that “arroz con pollo y frijoles,” or chicken, rice and beans, will be on the plate. Huerta, who has gone to culinary schools in Mexico, laughed at the story before placing an order of tuna ceviche on the counter.

Actually, not having had the chance to enjoy ceviche in this area ever, I was eager for a taste. Huerta’s creation featured lime marinated sushi grade ahi tuna with fresh seasonal watermelon, pickled onions and jicama yam bean.

In the past, mahi mahi had been my top choice for ceviche, which is a seafood cocktail of fresh-caught fish marinated or “cooked” in a large amount of lime juice. It often has lots of onion, garlic, tomatoes and cilantro.

Huerta’s ceviche creation was cool, sweet and delicious. The onions had been pickled in Catawba Island Breweries’ Hot Blonde, a spicy mango habanero blonde beer, and were crowded by salmon, watermelon and basil.

“We try to source as many fresh local ingredients as possible,” said Helsper. “From the sirloin cap, which is a cut of steak from the butt of a steer that is especially tender, to super-fresh salmon and walleye fillets to huge shrimp in a guajillo pepper butter.”

The tortilla soup contains chicken and chile broth with tortilla strips, cheese and avocado. Tacos range from steak and chicken to walleye and shrimp.

It was just luck that Helsper found himself living in the area. His father, Richard Helsper, was in the medical industry and looking for a beach house to handle all of the family during the summer. He found it in the Gem Beach area, giving the younger Helsper a base of operations.

The reviews so far have been glowing, except for the first one. It arrived before the restaurant ever opened.

“This used to be the Peninsula Restaurant, and a popular place for many years as a breakfast and lunch spot,” said Helsper. “Somebody left a review complaining that his favorite breakfast spot was no more.”