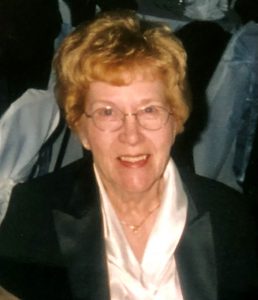 Joan M. Rosiar, 90, of Lakeside and formerly of Port Clinton, passed away Thursday, April 29, at Otterbein North Shore. She was born in Bennett, Colo. on Oct. 20, 1930, the daughter of D. A. “Del” and Marian (Beck) Weddell. After graduating from her hometown Strasburg, Colo. High School she attended Colorado Women’s College in Denver. She married Steve W. Rosiar on March 18, 1954 and soon after they both traveled across the Atlantic by Army ship and lived in Frankfurt, Germany. Once Steve’s tour of duty was up in Europe, they settled back in Aurora Colorado after a short stay in Springfield, Mo. and then moved back to Steve’ s hometown, Port Clinton (Catawba) in the late 1960’s. Steve preceded her in death on Feb. 1, 2018. Joan always loved being active in her husband’s activities. Joan worked as a teller at American Bank and Society Bank and after retirement she loved working at Pier 1 in Sandusky. She enjoyed spending time with her grandchildren. She was known for her wit, humor and her big heart.

Private funeral services for family and friends will be conducted 3 p.m. Friday, May 7, at Neidecker, Crosser & Priesman Funeral Home & Cremation Service, 1124 Fulton St. Port Clinton, OH 43452. Private interment in Riverview Cemetery will be held at a later date. Memorial contributions may be given to Otterbein North Shore, 9400 North Shore Blvd, Lakeside, OH 43440 or Stein Hospice 1200 Sycamore Line, Sandusky, OH 44870. Online condolences may be shared with the family at www.neideckercrosserpriesman.com.