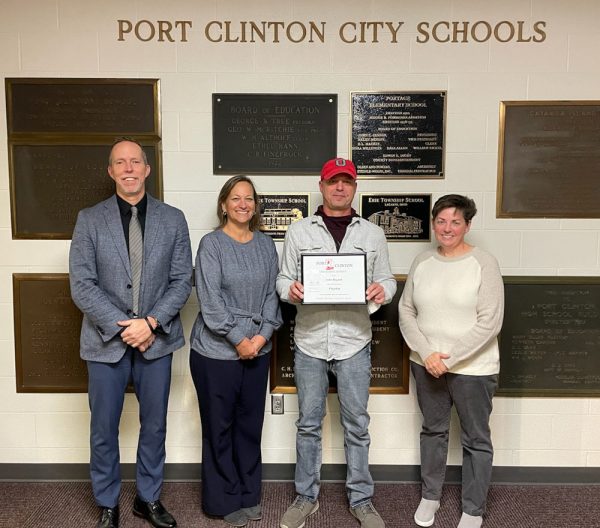 The Flagship Awards are part of Port Clinton City School District’s recognition program to honor parents, community members, staff and students that help the district fulfill its motto of “Proudly Charting a Course for Success.” At the recent Dec. 6, meeting, the Port Clinton Board of Education recognized John Bogard with a Flagship Captain Award.

John Bogard, Captain – Staff Award: Bogard is the glue that holds the Port Clinton School District’s transportation system together. His work ethic is outstanding and serves as a model for all.

Bogard is a year-round employee who never misses work. He takes his vacation days on Mondays and Fridays in the summer, so that he is available to help as a substitute during the school year, and schedules personal appointments outside working hours — and always says yes when asked to help.

Bogard takes pride in his work and has personal ownership in the condition of the bus fleet. With John’s efforts, Port Clinton Schools have never had a bus fail an Ohio State Highway Patrol inspection.

A specific example of Bogard’s commitment was demonstrated on Friday, Aug. 20. The new staff bus tour was set to go on road trip, and Bogard was scheduled to go to Cedar Point on vacation with his family.

Bogard contacted multiple school bus drivers to find a replacement driver. When that failed, Bogard volunteered to delay his family vacation plans and cover the trip. He is truly an unsung hero in the Port Clinton School District.

Because of his commitment to the transportation department, his role in getting students safely to school, and his ability to “think team, not self,” John was presented with a Flagship Captain Award.