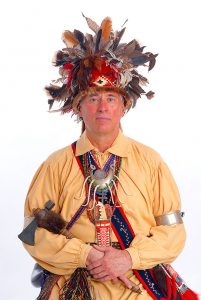 John Burke, a student of Indian lore since he was in the Order of the Arrow as an Eagle Scout, will offer interpretations of Native Americans and frontier personalities at the first presentation in the 2019 Catawba Island Historical Society Cultural Lecture Series.

Burke, the county treasurer in Medina County, will dress in self-made regalia from period materials that duplicate authentic museum pieces. The lecture is at 6:30 p.m. on Wednesday, June 12, at the Catawba Island Township Community Hall on West Catawba Road.

The presentation for the Catawba Island Historical Society will draw on Burke’s past portrayals of Captain Wolf, a Lenapi (Delaware) Indian who witnessed the Battle of Lake Erie in 1813, and Chief Pontiac of the Ottawa tribe who inspired the first major confederation of this area’s indigenous people.

Bill Van Der Giessen, Vice President of the Historical Society, noted that “several of the new Timeline Tale exhibits at the Catawba Museum at Union Chapel are now dedicated to Native Americans. Burke’s presentation will compliment the broad public interest in those displays and artifacts.”

The lecture series and museum are open to the public without charge. Instead of relying upon admission fees, these services are funded principally by subscriptions to the Catawba Island Historical Society. More information about membership is available at catawbaislandhistoricalsociety.com.